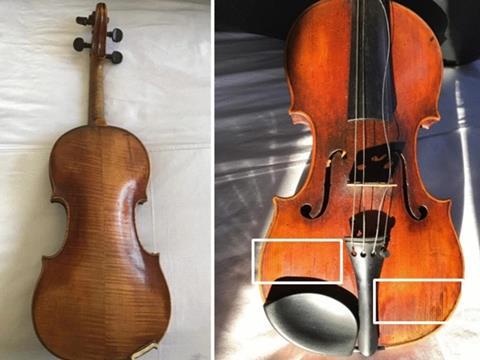 The original WhatsApp photos of the violin. The white rectangles indicate the rings measured during the first dating

A violin found in an attic in Italy has been confirmed as a priceless instrument made by Giuseppe Guarneri ‘filius Andreae’ in c.1705. The age of the wood was confirmed using dendrochronology, and the researchers were even able to prove it came from the same tree as the wood in an already-identified violin by the same maker.

Around 18 months ago Mauro Bernabei, a researcher at the Institute for BioEconomy at Italy’s National Research Council, received a WhatsApp message containing a photo of the unidentified violin, which the current owner had recently inherited. It contained a label reading ‘Joseph Guanerius Filuis Andreae Cremonae Sub Titulo S. Theresie, 1705’, but given the misspelling of ‘Filius’ it was assumed to be a fake label. All the same, Bernabei performed a dendrochronological examination on the spruce of the top, and discovered the most recent tree ring dated to 1696. ‘Adding a certain number of rings that were lost during the preparation of the soundboard, plus a few years for the possible seasoning of the wood, the date shown on the label would seem perfectly compatible,’ Bernabei stated in his paper. 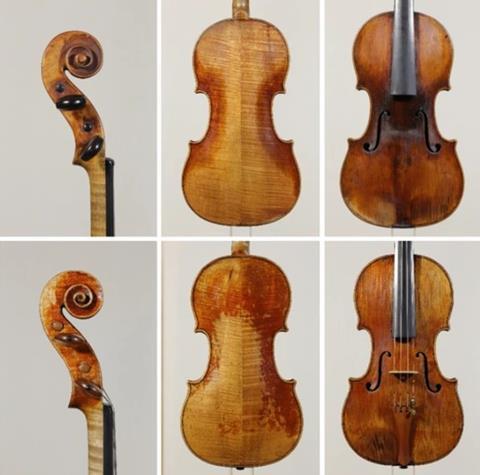 (Top) Scroll, back and front of the unknown violin. (Bottom) the Guarneri ‘filius Andreae’ with wood dated to 1695 by dendrochronologist Peter Ratcliff

The instrument was then compared with a ‘filius Andreae’ owned by luthier Bruce Carlson, which had undergone analysis by dendrochronologist Peter Ratcliff. The researchers were surprised to find that the wood was an exact match, indicating a ‘twin’ – two instruments made with wood from the same tree. The year of the second violin had already been established as 1705. ‘They are identical with regard to the choice of timber, having the same veining and the same design on the soundboard, the ribs and at the back,’ the report states. ‘The two violins are also identical as far as their construction, dimensions and varnish are concerned.’

According to online auction house Tarisio, the auction record for a violin by ‘filius Andreae’ (father of Guarneri ‘del Gesù’) is $654,237, sold in October 2019. The full paper discussing the research can be read here.