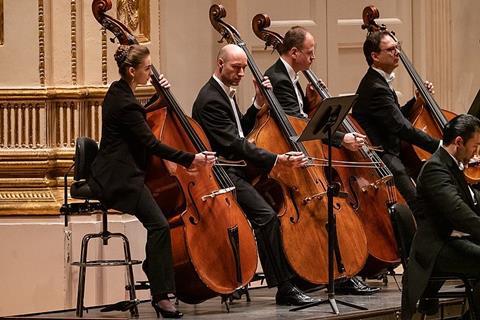 The Vienna Philharmonic Orchestra started playing to audiences in the Wiener Staatsoper after they had been told to stay inside while a terrorist attack unfolded in the streets.

The attacks, in which four people were killed and 17 injured, took place on Monday night in six locations in Vienna, including near a synagogue and the Wiener Staatsoper. As news of the nearby attacks came in, opera goers were told to stay inside, and the orchestra started playing in order to calm them down. In the minutes before the terrorist was neutralised at 8.09pm, video footage shows the orchestra playing the melody of Gott erhalte Franz den Kaiser, which was used as the Austrian empire’s anthem in the 19th and early 20th centuries.

One spectator, Barbara Lovett, who attended Mascagni’s Cavalleria Rusticana opera at the venue yesterday, posted the footage of the orchestra on social media.

She said: ‘The police kept us safe inside the opera house. While we waited, some members of the philharmonic orchestra started playing.

‘No attack will ever stop the music in Vienna.’

As the shooting started, just hours before Austria was to re-impose a coronavirus lockdown,  people enjoying a final night out in bars and restaurants were told to remain indoors.

A terrorist armed with an automatic rifle, pistol and machete was stopped by Austrian police after the attacks.

Interior Minister Karl Nehammer said the gunman was Kujtim Fejzulai, an Austrian-North Macedonian dual national, who was sentenced to 22 months in prison in April 2019 because he had tried to travel to Syria to join Islamic State.

According to a report, he was granted early release in December under juvenile law and police believed he was incapable of carrying out an attack.

1,000 security personnel have been drafted in to search for other suspects.

Two women and two men were killed on Monday night.

One of the women was a waitress who died of gunshot wounds in hospital, and another- aged in her 40s - later died in the Ottakring Clinic.

One of the male victims was discovered in the meat market; another was found seriously injured on Franz-Josefs-Kai, close to the Wien river.

A police officer was also shot and seriously injured. According to Austrian news agency APA, seven of the 17 victims being treated in hospital are in a life-threatening condition.