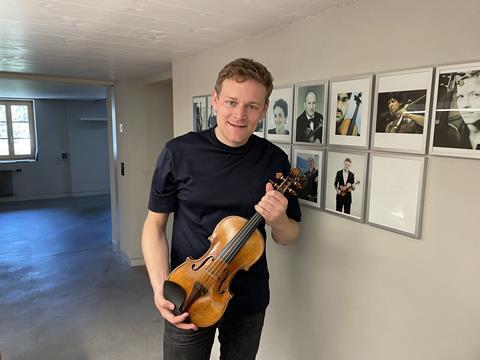 The Swiss Violin Making School Foundation has awarded the ‘Golden Bow’ to violinist Sebastian Bohren. Bohren received the award at a ceremony held during the opening of the Musikfestwoche Meiringen on 8 July. At the opening concert, Bohren performed the Mendelssohn Violin Concerto with Kammerphilharmonie Graubünden, conducted by Philippe Bach.

The prize is a fine gold-mounted bow from the Finkel bow company. Since 1998, the award has been given to string players that ’contribute to the enrichment of our cultural life’. Previous winners of the award include Thomas Zehetmair, Tabea Zimmermann, Patricia Kopatchinskaja, Kim Kashkashian and Leonidas Kavakos.

Born in 1987, Bohren trained in Zurich with Jens Lohmann and subsequently Robert Zimansky and Zakhar Bron, before studying in Lucerne with Igor Karsko and at Munich’s University of Music and Performing Arts with Ingolf Turban. He has received musical influence from Ana Chumachenco, Hansheinz Schneeberger, Dmitry Sitkovetsky, Christian Tetzlaff and Heinrich Schiff.

Bohren performs on the Giovanni Battista Guadagnini ’ex-Wanamaker-Hart’ violin from 1761, Parma, pictured above.