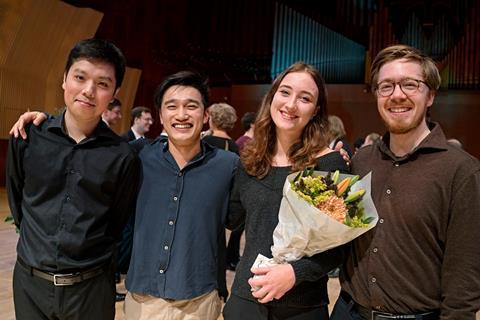 Four months after winning joint first prize in Bordeaux, the Simply Quartet has taken first place at the Carl Nielsen International Chamber Music Competition in Copenhagen, taking €15,000 in cash and a package of future engagements.

Second place went to the Balourdet String Quartet, based in Texas, followed by the Quatuor Elmire from France in third.

The final, which took place yesterday Saturday 19 October at the concert hall of the Royal Danish Academy of Music, saw each ensemble perform a quartet by Nielsen and one other by Beethoven or Schubert. The winners chose Schubert’s Death and the Maiden (no.14 in d minor, D 810) and Nielsen’s op.44 in F major.

The Simply Quartet was founded at the Shanghai Conservatory in 2008, but has since moved to Vienna and picked up two new members. Danfeng Shen (violin) and Xiang Lyu (viola) are the remaining founding members, with the group completed by Norwegian cellist Ivan Valentin Hollup Roald and Austrian violinist Antonia Rankersberger.

They are based at the Joseph Haydn Institute for Chamber Music at the University of Music and Performing Arts in Vienna, where they are supervised by Johannes Meissl of the Artis Quartet.

The winner of the quartet section of the inaugural competition in 2015 was the Arod Quartet, which went on to further competition success and featured on the cover of the February 2018 issue of The Strad.