Nine semifinalists will compete for the grand prize this June 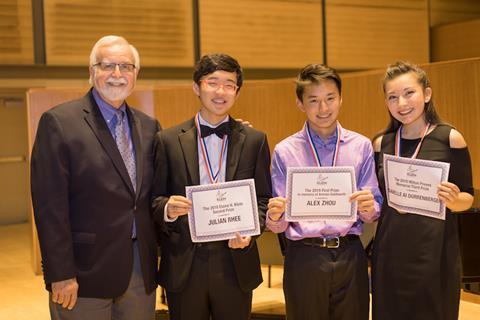 The Irving M. Klein International String Competition, held in the San Francisco Conservatory of Music from June 1-2, has announced this year’s 9 semifinalists, whittled down from 118 entrants:

In the semifinal round, each performer will play an unaccompanied work by Bach, movements from notable concertos and a new commissioned composition by Carlos Oliver Simon. In the final round, the artists perform additional portions of their selected concerto and one major sonata movement.

Each semifinalist not awarded a named prize receives $1,000. Further awards of $500 are given for the best performance of the commissioned work and of the solo Bach.

Awards of $500 are given for the best performance of the commissioned work by Carlos Simon, and of the solo Bach. Klein winners willl also participate in educational outreach in the Bay Area.

Presented by California Music Center and the San Francisco Conservatory of Music, the Irving M. Klein International String Competition is open to musicians between ages 15 and 23. Laureates include Jennifer Koh, Mark Kosower, Vadim Gluzman, Jennifer Frautschi, Alban Gerhardt, Frank Huang, and Robert deMaine. The competition is named for the late cellist and master teacher who devoted himself to the development of young artists.