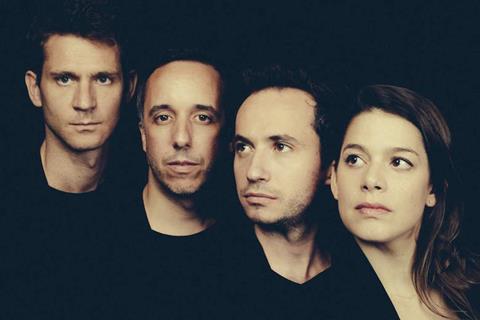 The French Quatuor Ébène string quartet has won the Frankfurt Music Prize 2019, which honours those who have made a special contribution to the international music scene. Its members – Pierre Colombet, Gabriel Le Magadure, Marie Chilemme and Raphaël Merlin – collectively receive €15,000.

Founded in 1999 at the Boulogne-Billancourt Conservatory in France, the group first came to international attention in 2004 after winning first prize in the string quartet category at the ARD International Music Competition.

With a repertoire ranging from classic works to interpretations of well-known film soundtracks and pop songs, it has gained a reputation for attracting a younger audience and has won numerous international prizes, including the BBC Music Magazine Award, the Gramophone Award, the Midem Classic Award and various ECHO Klassik awards.

‘The Trustees of the Frankfurt Music Prize acclaim Quatuor Ébène as an outstanding ensemble whose electrifying playing is characterised by passion, complete fidelity to the original works and a simultaneous delight in improvisation,’ the citation reads.

‘Through their seemingly effortless crossover into the world of jazz, the musicians have succeeded in increasing public awareness of the string quartet as the elite of chamber music, as well as attracting more people, especially younger people, to the concert halls. Moreover, the members of Quatuor Ébène … also pass on their outstanding skills and expertise to the coming generation of musicians in master classes.’