The quartet performed a programme of Schubert, Kurtág and Brahms to take the top prize of £10,000 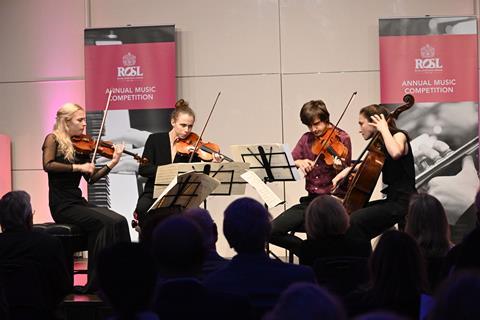 The final, held on Tuesday 12 October in London, consisted of four groups: the Brompton Quartet, Heathcliff Trio, Hill Quartet and Echéa Quartet. The Echéa Quartet secured its victory with a programme of Schubert and Brahms, as well as movements from Hungarian composer György Kurtág’s Officium Breve in memoriam Andreae Szervanszky

Formed of Rosa Hartley and Aliayta Foon-Dancoes on violins, Dave Shaw on viola and Eliza Millett on cello, the Echéa Quartet was formed in 2017 at the Royal Academy of Music. They were recipients of the Royal Philharmonic Society’s Albert and Eugenie Frost Chamber Music Prize (2019/20), winners of the ‘Tremplin’ at the Philharmonie de Paris’ String Quartet Biennale (2020) and prizewinners of the International Anton Rubinstein Competition (2017). The quartet are currently Chamber Music Fellows at the Royal College of Music, artists for the Concordia and City Music Foundations (2019/20) and Yeomen of the Worshipful Company of Musicians.

The adjudicators were Ann Beilby, Stephen Upshaw, Gavin Henderson CBE and Geoff Parkin. The Echéa Quartet will go on to perform at the Gold Medal final on 24 November. Previous ensemble winners include the Fitzroy Piano Quartet, Mithras Trio and the Marmen Quartet.