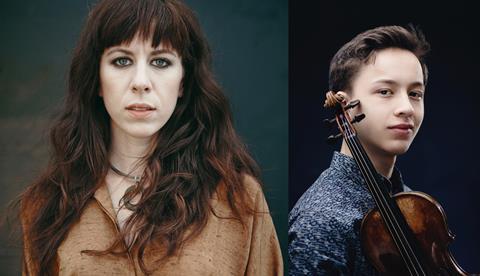 Bergen International Festival, the largest curated festival for music and performing arts in the Nordic region, launches tomorrow 26 May. This year provides audiences worldwide with digital access to 30 events with highlights including, among many others, 2021 Festival Composer Missy Mazzoli and young violinist Johan Dalene, winner of the 2019 Norwegian Soloist Prize. Mazzoli, a Grammy-nominated composer, made history in 2018 when she became one of the two first women – along with composer Jeanine Tesori – to be commissioned by the Metropolitan Opera. Her works are performed all over the world, including by the Kronos Quartet, Eighth Blackbird, pianist Emanuel Ax, LA Opera, New York City Opera, Los Angeles Philharmonic, American Composers Orchestra, and many others.

On 2 June, Mazzoli performs her Grammy-nominated work Vespers for Violin with Peter Herresthal, who is well known for his interpretations of contemporary violin concertos worldwide and has received three Spellemann prizes (known as the “Norwegian Grammy award”). The evening also features the world premiere of the orchestral version of Mazzoli’s Dark with Excessive Bright performed by the Bergen Philharmonic Orchestra, plus other works that capture the American soul by Charles Ives, George Walker, and John Adams.

Other string highlights include violinist and Hardanger fiddle player Ragnhild Hemsing with the Trondheim Soloists performing works by Grieg and other Norwegian composers (May 29); pianist Leif Ove Andsnes with young Norwegian string players who are current or former participants in the Festival’s Crescendo mentoring programme (June 3); and a Mazzoli-curated programme performed by the BIT20 Ensemble featuring compositions by 15- to 20-year-olds who participated in the New-York based Luna Composition Lab mentoring programme.

If you aren’t able to catch the premiere of the digital presentation of any events, recordings are available through 23 June. Explore the digital events and buy your tickets here.