All-female Korean quartet based in Germany scoops £10,000 cash prize plus package of concerts and residencies 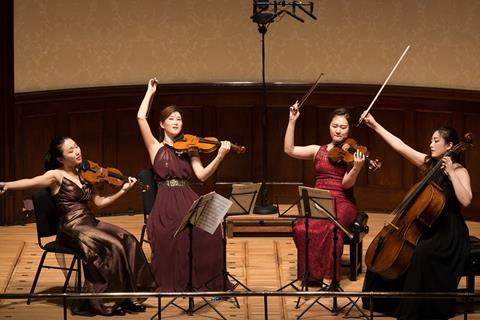 As well as £10,000 prize money, the first place comes with a package of recitals and residencies, including: a Wigmore Hall date in the 2018/19 season, a ten- to twelve-concert UK tour, residencies at the Banff Centre and Avaloch Farm Music Institute, a place at the McGill International String Quartet Academy and a record deal with Champs Hills Records. The Esmé Quartet were also awarded the £1,000 Alan Bradley Mozart Prize.

The £6,000 second prize and £1,000 20th-century prize went to the Goldmund Quartett, while the US-based Viano Quartet picked up the £3,000 and two £1,000 special prizes for the best performances of Thomas Adès and Haydn.

The triennial London International String Quartet Competition was taken over by the Wigmore Hall in 2010 and counts the Takács and Belcea quartets among its previous winners.