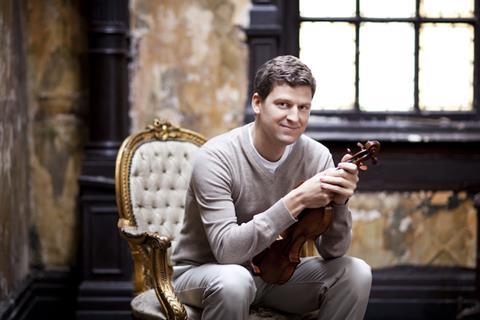 The concerto, which Ehnes premiered in 2017,  was written specially for the violinist. ‘James can play anything!’ commented Kernis.

Their friendship began when Kernis wrote Two Movements (with Bells) for Ehnes for the 2007 BBC Proms. The two continued their working relationship on the Violin Concerto, with Ehnes editing what the composer wrote for him, while upholding Kernis’s desire to bring virtuosity to new frontiers.

In addition to the Pulitzer Prize, Kernis is the winner of the Grawemeyer Award for Music Composition and Nemmers Award, and is a member of the American Academy of Arts and Letters.

He is also Workshop Director of the Nashville Symphony Composer Lab and teaches composition at the Yale School of Music.

Other triumphant string players at the Grammy awards include composer Laurie Anderson and the Kronos Quartet, which won in the Best Chamber Music/Small Ensemble Performance category for ‘Anderson, Laurie: Landfall’, an elegiac cycle of songs that show how human memory can be stronger than catastrophe.