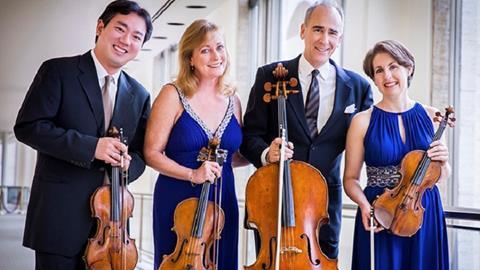 The ensemble will reprise the work on the orchestra’s European tour in April - performing at London’s Barbican Centre and at the newly opened Elbphilharmonie Hamburg. During the tour the group will also perform Dvorák’s 'American' String Quartet.

In July 2017 the ensemble will perform during the NY Phil’s annual summer residency at Bravo! Vail, and will make its New York recital debut at 92nd Street Y in November.

'We are so pleased that these four incredibly talented musicians from the New York Philharmonic will now perform as the New York Philharmonic String Quartet at home and abroad,' said NY Phil president Matthew VanBesien. 'The Quartet will represent both the magnificence of this Orchestra and the individual artistry of Frank Huang, Sheryl Staples, Cynthia Phelps, and Carter Brey. Chamber music has always been important to the Philharmonic, as having our musicians come together in smaller ensembles really allows you to hear their unique gifts. Audiences are in for a treat!'