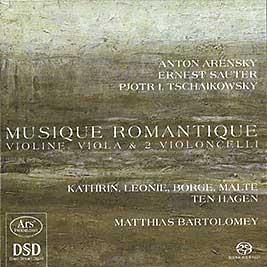 This well-thought-out and original CD has satisfying symmetry to it. Arensky’s Quartet, its middle movement a set of variations on Tchaikovsky’s ‘When Jesus Christ was but a child’, is paired with a three-movement quartet by German composer Ernest Sauter (1928–2013), written for Arensky’s centenary, and using one of the Russian’s own children’s songs as the theme for its central variations movement.

The young German performers create a gentle, burnished sound at the opening of the Arensky, the two cellos enhancing the sombre quality of the orthodox chant. This is a delightfully fresh and fluid interpretation of the quartet, with the players especially revelling in the myriad textures of the second movement.

With impressive family fairness (the quartet members are all siblings) the first violin chair passes from Kathrin Ten Hagen to younger sister Leonie for the remaining works. In Sauter’s expressionistic Musique romantique, Matthias Bartolomey’s solo cello is often subsumed within the quartet texture, but also emerges for a sonorous, double-stopped cadenza. The players throw themselves into this intricately crafted piece, attacking its polyrhythmic textures and expressive dissonances with energy, and tenderly cherishing Arenksy’s lullaby in the second movement.