Violist and music professor who co-founded the Lydian Quartet 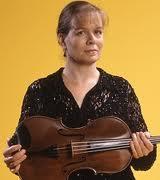 Viola player Mary Ruth Ray, a founding member of the Boston-based Lydian Quartet, died on 29 January after a battle with cancer. She was 56. For more than 30 years she taught at Brandeis University, based in Waltham, Massachusetts, and also performed as a soloist and member of the Emmanuel Music chamber ensemble in Boston.

Born in Knoxville, Tennessee, Ray began studying the viola st the age of ten. She graduated from SUNY in New York, along with violinist Judith Eissenberg. The two co-founded the Lydian Quartet in 1980, the same year Ray joined the Brandeis music faculty. She and Eissenberg were the only members to continue playing with the quartet, which received the Naumburg Chamber Music Award in 1984, toured Europe and Russia, and made more than 30 recordings together.

As member of Emmanuel Music, Ray performed the complete cycle of more than 200 Bach cantatas as well as chamber music by Debussy, Brahms, Schubert and Schoenberg. She also performed with the Boston Symphony Orchestra, Apple Hill Chamber Players, Boston Musica Viva and Juneau Jazz and Classics.

Known at Brandeis by the nickname ‘UV’, Ray taught viola and chamber music, including a course on ‘Inside the Piece: Chamber Music from the Player's Perspective’. She was made chair of the music department in 2005.