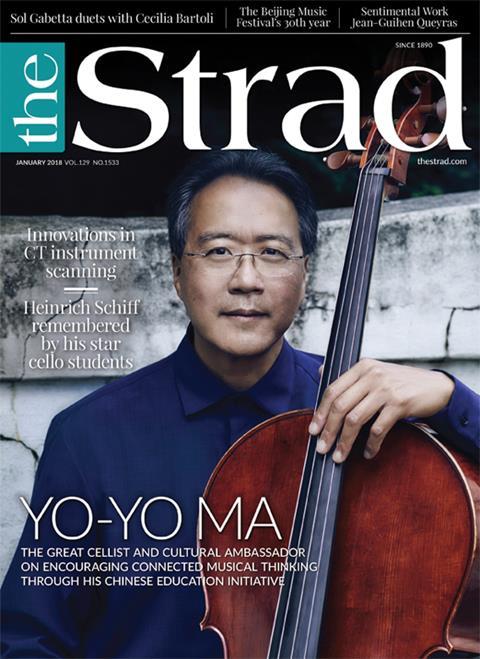 The Strad January 2018 issue is out now, in which Yo-Yo Ma tells us about his initiative to encourage young players in Guangdong, and his enthusiasm for making all kinds of connections.

In the second part of ‘Stradivari's Final Years', Andrew Dipper focuses on the master luthier's relationship with the future Pope, and what happened to his final resting place; Cellist Sol Gabettaexplains her latest recording, an unusual collaboration with mezzo-soprano Cecilia Bartoli to record lesser-known Baroque arias; Tully Pottersurveys the recorded legacy of Heinrich Schiff, who died in December 2016, while former students recall their time working with him.

Rudolf Hopfner offers a luthier's guide to CT scanning and the giant steps made in technology for non-invasive examination of instruments; and we listen out for a characteristically Baltic string sound in a profile of the Estonian Festival Orchestra.

In our monthly Masterclass, Barnabás Kelemen marks up the first movement of Beethoven's Quartet op.59 no.1; violist Roger Tapping discusses vibrato in Technique; American double bassist Edgar Meyer tells us his Life Lessons; Postcards from Istanbul where Vadim Repin and Daniel Hope premiered a new double concerto, and a ten-hour orchestral marathon at the 30th Beijing Music Festival; plus why Jean-Guihen Queyras loves Haydn's Cello Concerto no.1 in C major.