Why is the thickness of the front and back of Stradivari's instruments so unpredictable?

Although there is no record of how the Cremonese makers finished their instruments, Dirk Jacob Hamoen argues that the final scraping was done after they had been strung up and played in the white 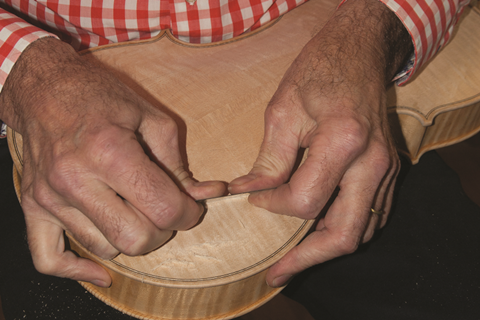 It might seem an outrageous idea to many readers but I would like to suggest that, as part of the standard workshop routine, newly made instruments should be strung up and played before being varnished. I also believe that this is how the old Cremonese masters ‘voiced’ their instruments – that is to say, how they fine-tuned the thicknesses of the front and back in order to give the instrument its characteristic tone quality.

How can it have been possible for Stradivari and his ilk to make so many violins with top-notch sound and playing characteristics (or at least the vast majority of them), without ever trying to copy a particular successful model exactly? It would seem from the surviving Stradivari instruments that their archings and models were constantly evolving, whereas his plate thicknesses seem to be unique to each and every instrument. In fact the thickness distributions are so unpredictable that they must have been considered not only irreproducible but not even worth considering as an essential property of the finished instrument.

How can we test this seemingly bizarre hypothesis? One way is to examine the high-resolution micro-CT scans that are now available for many Cremonese instruments (see Rudolf Hopfner’s article in The Strad, January 2018). These scans allow us to compare plate surfaces to within just a few strokes of the scraper. From these scans, an ‘ideal’ cross-arching curve can be made on a computer, which we can use to compare with the actual arching and find the amount of deviation – the ‘roughness’ of the curve.

This micro-CT scan of the 1727 ’Benvenuti’ Stradivari violin shows a noticeably flattened stretch on the outside of the back plate, right from the soundpost, even after correction for the general deformation

If an instrument has been voiced by scraping the outside of the plates, this side of the plate should consistently be found to be rougher, less ideal, and more bumpy than the inside. This outside roughness does indeed appear consistently on Cremonese instruments, and not on those of other regions. Hence, the conclusion that they have been finished that way is almost inescapable.

To read the full article, including Dirk Jacob Hamoen’s method for determining where to thin the back plate of a finished instrument, download the April 2018 issue now on desktop computer or via the The Strad App, or buy the print edition