The Cremonese luthier Giuseppe Ceruti is often overlooked in favour of his more famous son, Enrico. Duane Rosengard examines two matching double basses by Giuseppe to discover the secrets of his making style 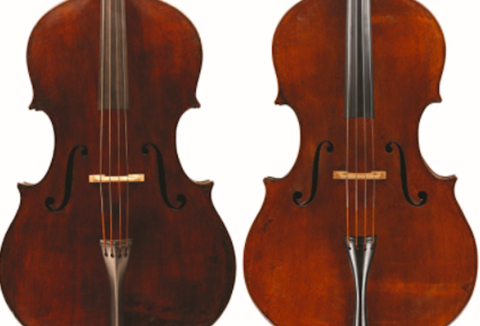 The following is an extract from The Strad’s September 2020 issue. To read in full, click here to subscribe and login. The September 2020 digital magazine and print edition are on sale now.

Determining Giuseppe’s inspiration – or which prototypes influenced his designs – is matter of speculation. Both double basses shown in this article, one from c.1819 and the other from 1820, were made on the same model. The soundbox outline is significantly larger and more gracefully rounded than the models devised earlier in Cremona by G.B. Ceruti for his one known double bass and those by Lorenzo Storioni. It may be loosely based upon a Brescian prototype: Giuseppe Ceruti’s model shares more affinity with that of Gasparo da Salò than Maggini, but only in a very general way. One of many notable divergences is the location of the back bevel (or crease) which in Giuseppe’s model is placed much lower and slightly above the widest point of the upper bouts. Like Maggini, superb draftsmanship is abundantly evident in the accurate left–right symmetry: each curve and counter-curve of the bouts and corners was carefully compass-drawn, and all are replicable without difficulty.

Read: Giuseppe Ceruti: In the name of the father

Both basses have a rib depth of 222mm from the endpin up to the bevel. The bevel angle is 12 degrees in the c.1819 bass, and the rib depth at the neck 176mm. The 1820 bass has a bevel angle of 15 degrees and terminates in a rib depth of 161mm at the neck. Though seemingly minor differences, the later example probably reflects an improvement based on personal experience, as the slightly sharper bevel angle and lower rib depth bring the neck in closer proximity to the player’s left arm.

The materials employed in the construction of the two basses might lead one to believe that a pair was planned from the outset. For the flat backs of both basses, a slab-cut poplar was arranged ‘book match’ fashion, leaving V-shaped figures visible at the lower ends with small traces of curl along the centre joints. Very similar poplar was used for the ribs.