It's the inside of the violin which governs its sound – how did we end up carving the outside arch first?

For almost two centuries luthiers have been copying instruments using the French method which, Torbjörn Zethelius argues, doesn’t give the interior carving of the violin the primacy it deserves – and crucially, that which it had in the hands of the original Italian makers 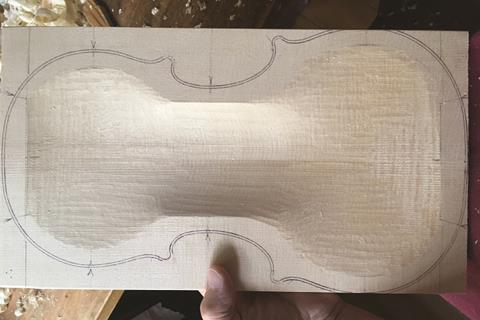 The following is an extract from a longer article in The Strad November 2017 – to read it in full, download the issue on desktop computer or via the The Strad App, or buy the print edition

As Paris became the violin capital of the world, new concepts in lutherie such as producing copies – ‘models’ – of fine Italian instruments were introduced. The Italian philosophy of the importance of the internal space was overtaken … The French method is our heritage from this tumultuous time – for better or worse.

I suggest that the modern method of starting with the outside arch is an integral part of the French method – as violin making evolved into copying the external resemblance of fine Italian instruments without proper understanding of how they were originally conceived.

Today, more than 200 years since the introduction of the French method, Stradivari, Guarneri ‘del Gesù’ and other Italian ‘models’ are merrily flooding the market, with few if any luthiers or players properly reflecting on the absurdity of this practice. I see signs of a growing fatigue with copies. Until recently the concept of starting the arching from the inside was unthinkable to the modern maker, deemed by many, if not most, as simply ridiculous. I suppose that this is about to change.

Torbjörn Zethelius first touched on this topic in an article for The Strad in August 2006. Read it in full for free here: Reverse engineering: explaining a Cremonese mystery by making the insides of the arches first