From the archive: Yehudi Menuhin discusses his violins, including this Guarneri copy by Glen Collins

These photographs of a 1987 copy of the ‘d’Egville’ Guarneri by Glen Collins appeared in the April 1991 issue alongside an interview feature with Yehudi Menuhin on the occasion of his 75th birthday. The interviewer was Tully Potter – who still works with The Strad as our historical consultant 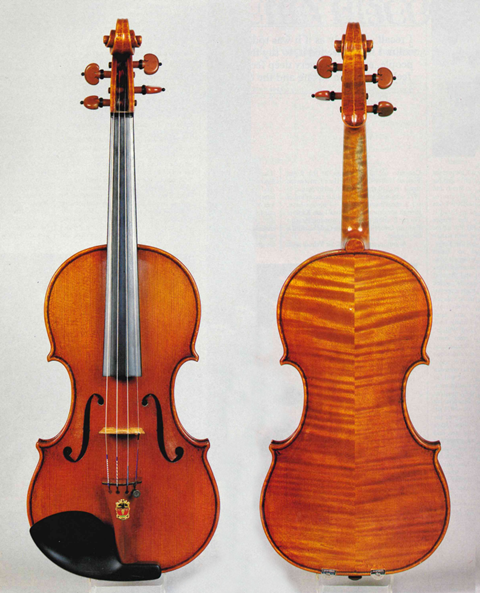 Could Sir Yehudi say something about his violins – which have included one of the greatest Strads, the ‘Soil’ , and perhaps the most beautiful Guarneri del Gesù, his present front-line fiddle, the ‘Lord Wilton’ – and his violas and bows?

‘I was wedded to Strads and I had my illicit adventures with Guarneris, which are wild and earthy. In 1928/9 1 was lent a Guarnerius and I received my Strad at the end of 1928. That was the ’Prince Khevenhüller’ of 1733 [now sold]. For a time I also had the ‘Soil’ Strad [now with Itzhak Perlman]. In about 1933 1 was lent the ‘Ysaÿe’ Guarnerius which belonged to Emile Français, my luthier. Isaac Stern owns it now.

My first wife bought me a Guarnerius [later lent to Alberto Lysy] in 1939, and the next Guarnerius was the ‘Count d’Egville’, which I used for about two years – I made a special trip to see it and walked away with it; I played it at the United Nations 20th Anniversary Concert with Ravi Shankar and later returned it.

About 20 years ago I finally took the plunge and bought the ‘Lord Wilton’ Guarnerius. I have a great many modern instruments, including a Spidlen and a Poggi. My Glen Collins gives me enormous satisfaction and pride in at least three ways: to find a contemporary violin maker who can produce a violin both beautiful and with so wonderful a sound, that he is an Englishman, and that I can know him personally, much as the musicians who ordered their Stradivarius and Guarnerius from the maker himself.

I am now looking forward to a new copy of the “Lord Wilton” made by Glen Collins. I have my first Grancino, a seven-eighths size, and my second Grancino; and Enescu gave me a Sanctus Seraphin. Violas? I have the Testore bequeathed to me by Nathan Firestone, which I lent to my school. I also have one by the American maker Wiebe, on which I recorded the Brahms viola sonatas with Louis Kentner, and I gave another to the school. Bows? I have two Tourtes, four or five Voirins, a Peccatte, a Tubbs, two Kittels … Tourte, Kittel and Voirin are my favourite makers.

Read: From the Archive: a cello by Glen Collins, ‘The Royal Charles’, 1982