From the archive: a violin by Omobono Stradivari, Cremona, 1740 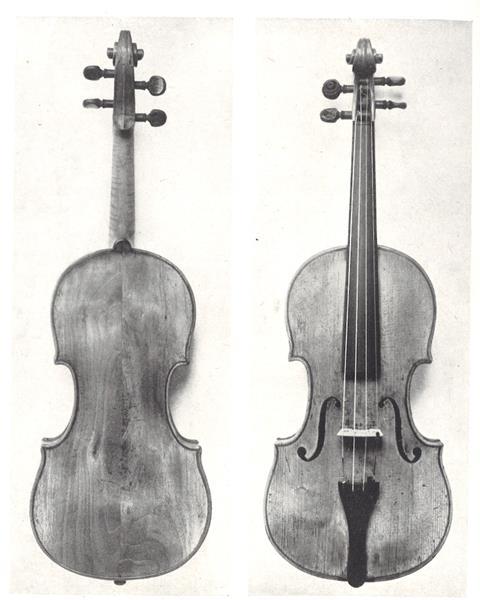 This illustration of a 1740 Omobono Stradivari violin was published in The Strad, August 1929. The following text is extracted from an article accompanying the photographs:

As long ago as the occasion of the 1872 Exhibition, the question of the degree of participation by the sons of Stradivari in the production of the instruments of their father was a current one. Francesco Stradivari remains a shadow, as no violin by him is known, so far as I am aware, but the instruments by Omobono which exist prove the latter maker to have been an artist of great ability, and one more fully inoculated with the manner of Antonio than any other master in Italy. I should like to suggest that there is a considerable possibility that some of the violins which are admittedly the work of Omobono, were originally offered as being by his father, possibly after the death of the elder artist.

This fine violin by Omobono Stradivari dated 1740 is unique in my experience, as it is the only one by the maker which reproduces the ‘Long Strad’ design, and it is possible that so far as classical Cremonese production, the instrument marked the very last occurrence of that historic pattern.

The back of the violin is of wood of plain appearance. In that respect the instrument resembles violins of Antonio, of the years 1735-1737. The lower wings of the soundholes show the delicate concavity of surface which is characteristic of the work of Antonio. The thickness of both plates  are similar to those of Antonio, with a slight additional strength of substance; the varnish of the violin is of pure and fine Cremonese quality, and the tone – as might be expected – is most attractive, reproducing with fidelity the noted Stradivari timbre, so rich and reedy.