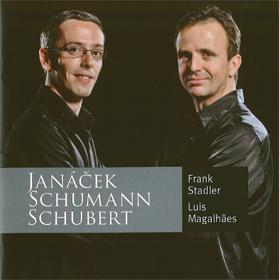 The powerful opening chords set the scene for Frank Stadler’s impressively intense performance of Schumann’s Second Sonata. Perfectly capturing the wide mood swings that picture the ardent and dreamily melancholic elements of Schumann’s character, he brings a flexibility of rhythm and tempo to stamp his own view on the score. In Luis Magalhães he has a partner who keeps the urgency in tempos needed to generate the work’s vigour.

Schubert’s Fantasy often sits uneasily under the violinist’s fingers, though Stadler’s unfailingly accurate intonation makes light of the problems that such awkward writing creates. The two players take an equal share in the happiness of the score, with Magalhães’s nimble fingers dancing through the third-movement Andantino before an irresistibly lively final Presto.

Stadler’s warming vibrato is less ideal in Janá?ek’s Sonata, at times smoothing over the score’s pungent colours, a point that particularly manifests itself in the lack of biting aggression in the second movement. I would have also preferred a more percussive piano, though the duo is meticulously observant of dynamic shading.

If the coupling attracts, then you will find much to enjoy. The recorded balance is good and the sound has a natural ambience.