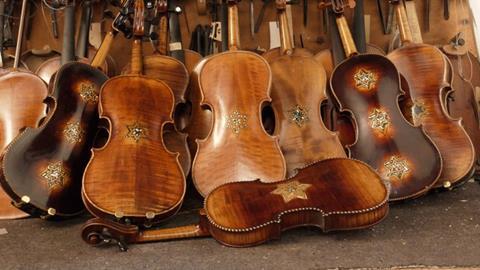 Israeli luthier Amnon Weinstein has been honoured with Germany's Bundesverdienstkreuz (Federal Cross of Merit) in recognition of his 'Violins of Hope' project (pictured).

German foreign minister Frank-Walter Steinmeier presented the award to the 77-year-old on Wednesday at the Jewish Museum in Berlin. 'Behind each of your precious violins hides a human soul,' said Steinmeier. 'With your 'Violins of Hope', you give a voice back to these lost souls.'

'Violins of Hope' is a collection of some 45 violins played by Jewish musicians before and during the Holocaust, which were restored by Weinstein over a period of two decades. The instruments have since been performed in concerts around the world - including by the Berlin Philharmonic in January 2015 to mark the 70th anniversary of the liberation of the Auschwitz concentration camp - and have been exhibited in the US and in Germany.