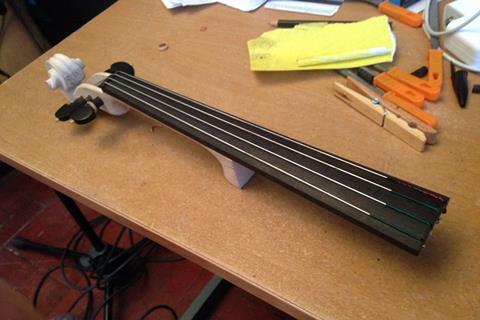 I made a practice aid designed for silent left-hand practice while travelling – I call it the Traviolin. It’s something I’ve been thinking about for a while – there were things I needed to learn while I was on the move and it sometimes helps to have a physical sense of what I’m doing. I wanted something small, silent and portable, and also unobtrusive, so that I could use it in a public place without drawing attention to myself while practising. I ordered parts on the internet, put them together and strung up a neck that feels almost exactly like a violin or viola. It’s not designed to make a noise at all (in fact, it makes a silly raspy sound). I use it held on my lap as I read the music, or for finger exercises. I can just pop it in my bag and whip it out when I’m on a plane or a train. 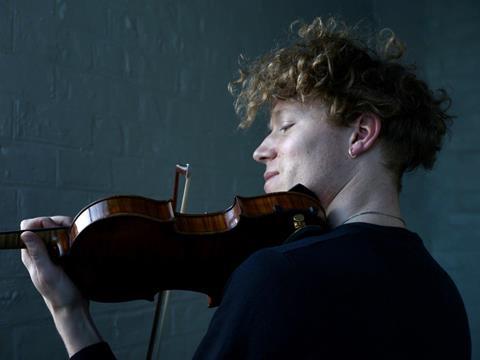 I used it a lot this summer, while preparing to play the whole of Beethoven’s Sixth Symphony from memory at the BBC Proms with the Aurora Orchestra. It was incredibly helpful to have something that physically replicated playing the part when I was learning it, which involved quite a lot of hours of plugging away. I found that when it came to rehearsals, it definitely made a difference – even though a lot of my prep hadn’t involved my actual instrument. Playing is a complicated melange of many different variables all interacting simultaneously; often when practising you are focusing on particular variables and not necessarily attacking them all at once. I find that the most effective kind of practice is when you are really isolating a single element of playing. With this device I’m just focusing on the action of the fingers of my left hand, not worrying about the bow or coordinating, or even being in playing position. It eliminates many of the tensions associated with being in playing position or doing certain movements, such as racing up and down the fingerboard. I was surprised to find that there is nothing out there like my Traviolin, so I’m thinking about developing it to see whether it might help other people. I’ll definitely take it with me when I’m next pressed for time. 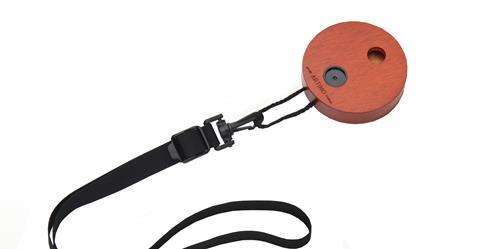 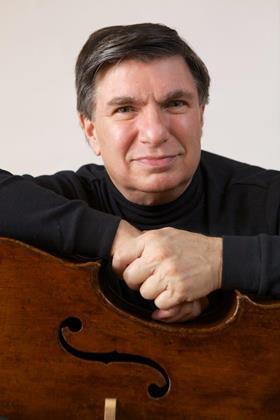 Playing on a podium is beneficial for cellists not just because of the raised position but also because of the acoustic property of the podium. So over the years a number of devices have been created to try to give the cello a bit of a lift, to recreate that podium sound. I use a small round Artino Sound Anchor, which I think of as a micro-podium. It’s basically an endpin holder made of hollowed-out wood, and it makes an extremely positive and audible difference with most (but not all) cellos (it’s a little baffling why it works for some but not for others). It improves both the resonance and the response in my cello, no matter what type of floor I’m on. My cello resonates more freely and loudly – and volume is always an issue for a cellist.

I use the anchor for all performances except ones where I’m on an actual podium. It’s designed to attach to one chair leg, but I’ve modified mine by adding an additional cord that goes through the loop on the device and hooks around each leg of the chair to create a T-shaped anchoring system.

I’ve been using this particular anchor for about five or six years, before which I experimented by making my own small, hollow square or rectangular endpin supports out of wood to see if they improved the sound. Most cellists prefer to use some sort of anchor to avoid ruining people’s nice wooden floors, and we definitely don’t want to play on carpet, as that just absorbs the sound. And since you need something to rest your endpin on anyway, if you can come up with a device that improves the sound as well, that solves two problems at once. 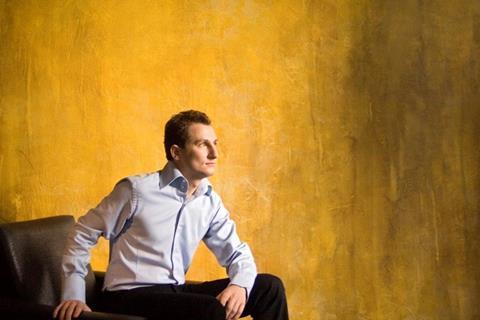 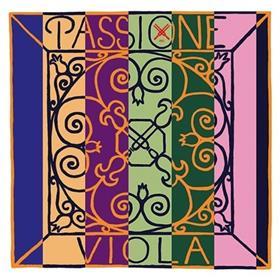 In 2008 the Habisreutinger Foundation loaned me the first viola built by Stradivari – the ‘Mahler’ of 1672. It’s an incredible instrument, but it hadn’t actually been played very much. To tell the truth, it was not easy to play at first, so I started looking for different solutions immediately. I changed the strings almost right away, and it took at least three years to find the right ones. Little by little I moved to wired gut – and now I use Pirastro Passione strings. The C, G and D are wired gut, and for most of my concerts I use a metallic A string. If I’m playing with a period orchestra, or playing solo Bach music, I use a naked gut A string, and occasionally a naked gut D as well.

I have found that gut strings free all the harmonics of the instrument. In an old viola like mine, all the richness, beauty and power of the sound comes from harmonic resonance, so I need to do everything I can to enhance that. When I was trying new strings, I wanted to experiment with them in different contexts – as a soloist, in chamber music, with orchestras and in various-sized halls with different types of resonance. I tried each set for a minimum of two months and went through a lot, including Thomastik-Infeld’s Vision Solo, which were easy to play and well balanced, but still left me feeling something was missing – the viola wasn’t free. I decided to try the Pirastro strings when asked to play some Berlioz with a period orchestra who were asking that I use naked gut strings for the C and the G. I liked them because they were more resistant to tuning issues than other gut strings and the reaction was more powerful and quicker. Then I recorded my first Bach CD and I used the same combination. It all came together with my repertoire at that point; the strings turned out to be the right choice for me and I kept using them. Since then the viola has increased in power, in resonance and in richness of timbre; the strings are definitely bringing out the best in the instrument. 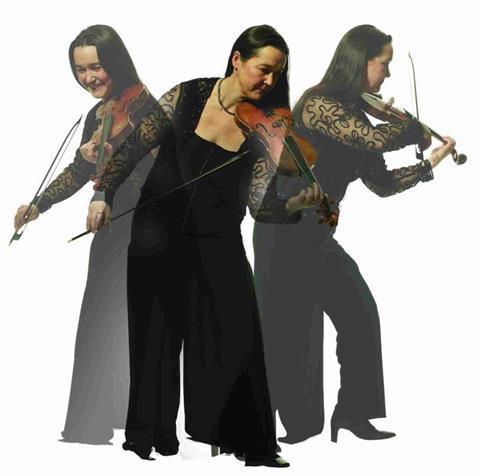 Uncovered gut strings make a huge difference to my sound and qualify as my most significant accessory. I love playing with three uncovered gut strings (G, D and A) for repertoire right up to the mid-20th century. I’m flexible about which brand I use, and have discovered through new research that gut strings were thicker than I had first believed when I began my journey into historical performance practice.

I love the physical response of the open gut strings. They add a lot of character to the sound – in fact, they give me a whole new palette of colours. It’s possible to coax a vast range of effects, sounds and dynamics from gut strings – I don’t find them limiting. The strings definitely affect my musical intentions, along with many other factors that inform how I play. But, in the end, the sound is in my ears and in my mind; the accessories and equipment are a means to a musical end, as is my decision not to use a chin rest or a shoulder rest.

Research into historical performance practice has found that chin rests and large shoulder rests that many players use today were first invented as late as the third decade of the 19th century, when composers began to require violinists to play in much higher positions. Removing these items for earlier repertoire has liberated my playing – instead of being held in a fixed position, my whole body is free for the music, and I’ve lost a lot of aches and pains in the process. The physical relationship with the violin, and the way I manage it, change my technique. This has all had a profound effect on the sound I produce. 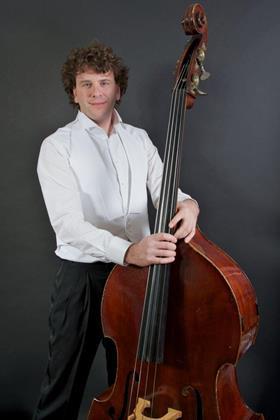 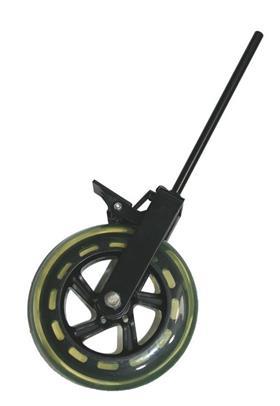 My most important accessory is my bass wheel. It’s absolutely essential and saves on an awful lot of chiropractors’ bills! Bass wheels come in all sorts of shapes and sizes – mine was custom made for me by a friend. I’ve had the same one for 20 years and I simply couldn’t do without it. It took a while to find the right wheel because back then there weren’t many to choose from. Now, of course, almost all bass players have one and there are loads of them out there (you can buy them really easily online). Bass wheels have evolved over time, though essentially the principle is the same: you take the spike out of the bass and put the stem of the wheel into it and off you go. Being able to use my wheel takes a huge amount of effort out of moving the bass around. Parking is a real issue, especially in London. The wheel means I can park further away and also makes using public transport much more feasible. It definitely has a positive knock-on effect on my playing – I arrive at the venue feeling much fresher than I used to, with more energy to perform. Many times in the past I’ve turned up exhausted, with muscle pain in my back just from getting the bass there. The wheel also leaves me with a free hand for my chair, an old bar stool that I’ve adapted. When I’m going somewhere I have in my right hand the bass mounted on the wheel and in my left the stool and my clothes – and I’m ready to go. I love playing the bass, but moving it around is a pain, and the wheel makes a tough job much easier. 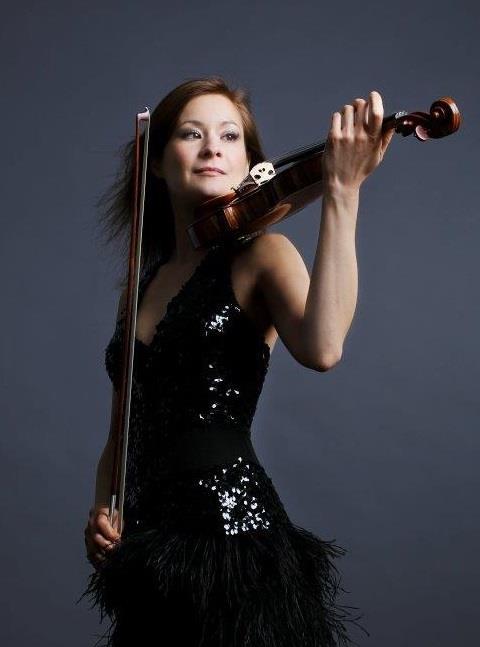 I stopped using a shoulder rest when I was 19, and it is definitely the thing that has made the biggest difference to my playing. I think it was Ivry Gitlis who said to me, ‘Why do you have this thing on your violin? You don’t need it.’ He said that taking the rest away would really change the way I play and handle the instrument, as it’s so much closer to your body when you don’t have the rest. He was right! He gave me a little sponge to use instead, and in the beginning it felt very strange. Then after a while I felt so much more relaxed – it was such a different way of playing. It is actually the biggest change I’ve ever made. At first it wasn’t comfortable – I had to find a new balance. I had the feeling that my shoulder needed to be much higher to compensate for the absence of a rest; I had to force myself not to do this, instead taking more of the weight of the violin in my left hand. When I first started playing in the new position it was more tiring, but I soon got used to it. It’s like exercise – the muscles have to work in a different way. Even though it was exhausting I found I had much more freedom, so I preferred to go through the difficult period to make things easier in the long term. Playing without a shoulder rest enables me to feel all the little vibrations of the wood, and my sound has become bigger, partly because I am able to use my bow more openly. Playing without a shoulder rest has worked for me, but I wouldn’t recommend it to everybody – I think if someone has a very long neck it’s difficult to play without one.