Mstislav Rostropovich was closely associated with the 1711 ‘Duport’ Stradivari, but he owned several cellos, including this late masterpiece of Giovanni Battista Guadagnini which was acquired from his estate by Dextra Musica in 2018. It is another of the truly outstanding instruments in this collection, a prime example of Guadagnini’s late period in exemplary condition. Guadagnini himself seems to have known and worked with the cellist Carlo Ferrari, and his own designs for the cello changed and developed dramatically through his career, possibly as a result of practical co-operation between the two.

This instrument is of compact size to facilitate virtuoso playing, but the broad, fully arched model provides great depth of tone. In 1783, when the cello was made, Gudaganini was 72 years old, working in Turin, and under the patronage of the young Count Cozio d Salabue, who encouraged him to adopt certain Stradivarian mannerisms. Guadagnini was reluctant, and clearly preferred to follow his own ideas, but the black-inked chamfers of the scroll, perfectly preserved on this cello, are one concession at least to the Cremonese master. In fact, the form and placement of the f-holes seem to owe something to the designs of Domenico Montagnana. Every aspect of the instrument is beautifully intact, and aged only in the most gentle and natural way. The dark plum-red varnish is applied deep into the wood, giving maximum emphasis to the lightly marked flame, which is consistent throughout the instrument. The front is from a very fine piece of spruce with fine straight grain, and the whole instrument has a striking unity of design and execution, an extraordinarily testament to the energy and dedication of Guadagnini in the very last years of his long career, which can be fully perceived and appreciated through its wonderful state of preservation. 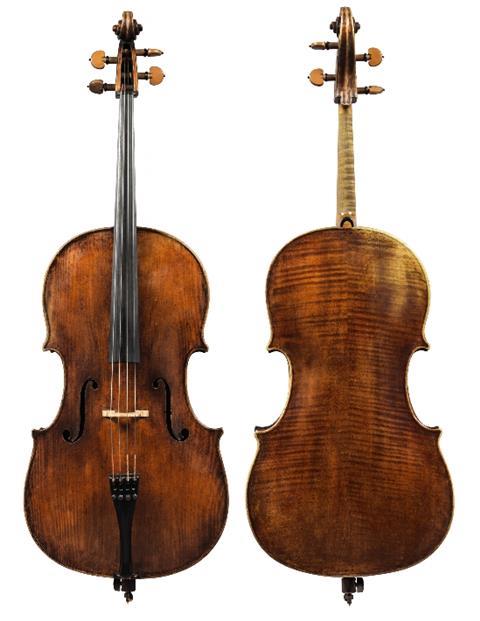