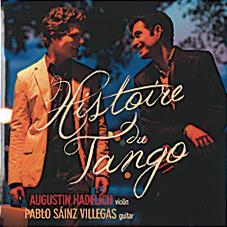 Despite its rather nebulous title, this curiously constructed disc confirms Augustin Hadelich’s place among the most admired violinists of his generation. Opening with a vibrant performance of one of Piazzolla’s most famous scores, he moves idiomatically through the work’s many moods and, with judiciously used portamento, adds much to the dance’s smoochy atmosphere.

Five of Manuel de Falla’s songs from Canciones populares españolas are captured in a range of subtle colours, each one moulded and characterised to reflect the words of the original song. The Spanish theme continues with Sarasate’s virtuoso showpiece, Zigeunerweisen, though here a guitar is certainly no substitute for the intended piano accompaniment. It’s a shame that Hadelich presses forward with such fast tempos: the ends of phrases are snatched, and though he is technically secure, the fast sections sound too breathless.

The disc’s only work written for violin and guitar is Paganini’s Sonata concertata, a score that requires no great display of virtuosity. That facet is reserved for the following variations on an aria from Rossini’s Mosè in Egitto, where Hadelich flawlessly meets the improbable task of playing it all on the G string.

Throughout, the guitar playing of Pablo Sáinz Villagas is absolutely superb, and the recording is nicely balanced.