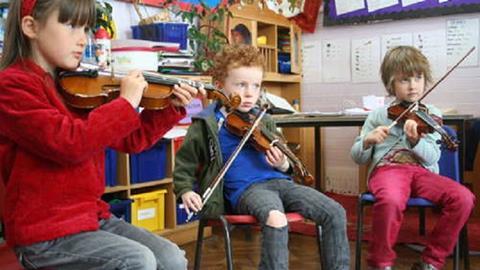 For financial reasons, music educators are having to provide new ways of bringing children into the world of music making by teaching in groups and whole classes. There are many reasons to favour group teaching over the isolation of one-to-one lessons (by which I mean those that are not supported by ensemble opportunities), but the decision to focus on group tuition must be for those reasons, and not just because of the financial benefits.

I’ve worked for 35 years in many settings, including schools where music is taken seriously, and schools where it’s regarded as entertainment and not education. I’ve had the opportunity to work with organisations such as the National Children’s Orchestra, where all of the children attending had one-to-one tuition. In the 1980s I had the privilege of working for the Tower Hamlets String Project, where we taught whole classes to play stringed instruments as a team. When the children reached Year 6 there was a string orchestra. Singing and musical games were intrinsic parts of the teaching and made for more rounded musicians, playing together and in tune.

The main point of playing an instrument is to play with others, and with groups you can make music from the start. You can sing in parts; play in parts; play and accompany what you are singing; write music to suit the needs of individual children; and involve adults in the learning. You become a facilitator, and engage in music making all day long.

If you look at what almost every music service, junior college and music organisation now provides, it is clear that we no longer believe that one-to-one is, on its own, satisfactory. We have learnt that group music making and musicianship skills such as singing, movement and knowledge of other musical cultures are all important and help children to engage. It is no longer the (isolated) one-to-one teacher who is responsible for the entire development of the musician. The idea of the single ‘maestro’ has gone.

This gives the teacher opportunities to engage more in the musical side of teaching music. It has also led to an explosion of repertoire for group music making. No longer do our pupils have to be ‘good enough’ to play the cello part. We can write the part to suit them; even they can write a part to suit them. Teachers who have taught only one-to-one find that they have to retrain to work in this ‘new’ way. Not all are happy or able to do this. There are still many who believe that until your technique is good enough you can’t make music, and this makes them less adaptable.

I was eleven when I was given the opportunity to learn an instrument; we are now introducing them to children as young as five. This means that we have to be more practical, playful and creative in our teaching. Also, in the 1970s my parents didn’t have to pay. I had a free cello and one-to-one lessons. That is rare now and it is often through necessity that we need to teach in groups.

If groups have long enough to get set up, enough space to play in, and an able teacher who prepares and arranges good repertoire, the children’s experience is exciting. We can make music from the first lesson with our friends! Some schools support the lessons with singing or musicianship sessions, but many don’t and so the one-to one only experience is replaced with a four-to-one experience which, unless well delivered, can be a disaster.

I believe that the best way is an integrated system, where the teachers plan carefully and with reference to each other, linking the one-to-one and ensemble learning. This best of both worlds is not a cheap solution, but if we believe in the value of music education it’s worth striving for the best and facilitating it.