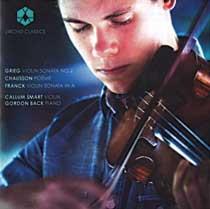 Callum Smart won the strings category of the BBC Young Musician of the Year Competition in 2010 when he was 13, and his career has been developing nicely since. This is his debut CD. Early on in Grieg’s Second Violin Sonata he demonstrates a delicious, creamy sotto voce and a nice line in elfin playing. There is a finely judged balance of simplicity and Romantic melancholy in the slow movement, and a degree of rhythmic freedom in the finale, bringing with it touches of wit and poetic musing.

Chausson’s Poème has a winning sense of natural authority. The exoticism of this tale of a magic violin comes across vividly but without indulgence. The tone is beautiful, the double-stopped demands of the violin writing are handled with ease, and there is a constant blend of freewheeling rhapsody and musical purpose.

In Franck’s Sonata, after the reveries of the opening movement, Smart launches into the Allegro with real dynamism, and sweeps through its many changes of mood and tempo with flair and colour. His gift for quiet rapture shows again in the hushed dolcissimo passages of the third movement. The balance of the recording, with Smart to the fore, slightly undermines the canonic equality of the two instruments in the finale, but this too is an excellent performance.