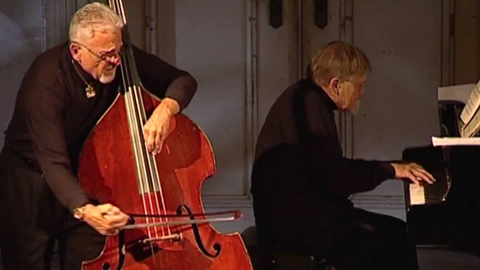 Born into a family that had been playing the double bass for seven generations, at the age of nine, Gary Karr began to play alongside his grandfather, father, uncle and two cousins in LA-based orchestras. He continued to do so until he entered UCLA, where he studied briefly with Herman Reinshagen before moving to Northwestern University to study with Warren Benfield, then to the Juilliard School where he worked principally with Stuart Sankey. Karr made his professional debut in 1961 with Thor Johnson and the touring Chicago Little Symphony. His breakthrough year came in 1962, when first he debuted with Leonard Bernstein and the New York Philharmonic before making his solo recital debut in Carnegie Hall. It was after this concert that Serge Koussevitzy's widow, who had attended, telephoned Karr and offered to donate her late husband's 1611 Amati double bass. Karr played exclusively on the Amati ever since, until luthier James harn recently built a new one for him 'of superior power even to the Amati.' Karr performed as a soloist in six continents with the world's major orchestras, including the Chicago Symphony, London Philharmonic Orchestra, Hong Kong Philharmonic and Oslo Philharmonic. He received the Bronze Medal from the Rosa Ponselle Foundation, which recognised him as an outstanding lyrical musician and in 1995 he was awarded the Distinguished Achievement Award from the International Society of Bassists (ISB). Karr made his farewell public concert as part of the 2001 ISB Convention in Indianapolis, attended by an audience of 800 bassists from 27 different countries. Following his recital with his pianist, Harmon Lewis, he was awarded the ISB's Distinguised Teacher Award.