From the Archive: a violin by Johannes Bernardus Cuypers, The Hague, 1810 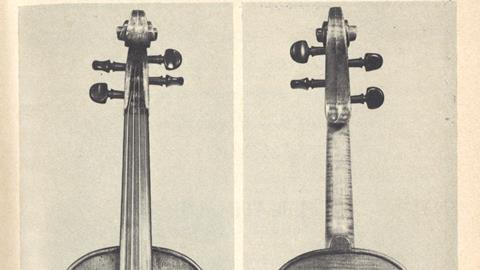 This illustration of a violin by Johannes Bernardus Cuypers was published in The Strad, May 1972. The following text is extracted from the article accompanying the photographs:

Dutch violin makers were for a great number of years overlooked in favour of better known Italian, French and English instruments. The early Dutch makers copied the Amati model almost exclusively and it was not until some examples of Stradivari's work or model found their way into Holland that they began to recognise the tonal superiority of the lower built Stradivari model.

One of the most sought-after makers who worked in Holland during the 18th and 19th centuries is Johannes Cuypers of The Haugue (1724-1908). Cuypers was a clever and industrious maker who worked until he was well passed 80. He built instruments on a bold flat model not unlike the Gaglianos. He had two sons, who were both makers. Johannes Franciscus and Johannes Bernardus, the latter of whom made the  exceptionally well preserved and boldly modelled example here illustrated.

The instrument has a one-piece back of wood marked with a handsome small figure. The ribs and head are of similar figured wood. The table is in one piece having fine grain on the treble side and opening out on the base. The varnish is of an attractive light golden-brown colour.