From the Archive: a violin by Jacob Stainer, Absam, c.1660 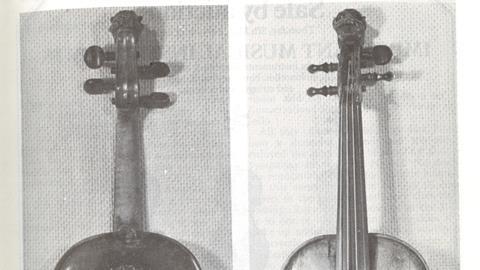 This illustration of a violin by Jacob Stainer was published in The Strad, May 1975. The following text is extracted from the article accompanying the photographs:

Jacob Stainer, the most celebrated of all the German school of makers, was born at Hall, near Absam, Austria in 1621. His distinctive model was widely copied during his lifetime in his own country and in England, where for many years his violins were esteemed more highly than those of Amati and Stradivari.

Stainer was sent as a boy to learn the craft of an organ builder. Finding this occupation too laborious he turned his attention to the making of stringed instruments and served an apprenticeship to a Tyrolean lute and violin maker. On completion of his apprenticeship he is believed to have travelled to Italy where some accounts relate that he worked for a time at Cremona under the Amatis, later visiting Venice.

As a workman Stainer was of the first rank. His violins are usually about the size of the ordinary Amati instruments, but some are rather larger, and measure a full 14 inches in length. Stainer's arching has been much exaggerated by copyists of all nationalities. In a good specimen of Stainer's violins the swell of the form is no higher than that of an average Amati. A characteristic feature of his violins is that the arching of the table is higher than that of the back.

The Stainer illustrated has been in American ownership for many years. The back is of bird's-eye maple, the sides of flamed wood. The table is of fine grain spruce. The scroll is very artistically carved in the form of a dragon's head.