From the archive: a cello by Antonius and Hieronymus Amati, Cremona, 1615 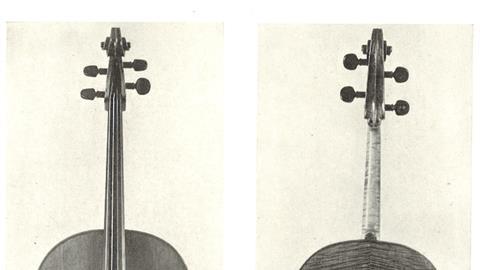 This illustration of a 1615 Antonius and Hieronymus Amati cello was published in The Strad, February 1934. The following text is extracted from an article accompanying the photographs:

This excellent specimen of the work of the Brothers Amati was made in 1615 and has a well authenticated pedigree. It was brought to England at the close of the 18th century by Signor Felice de Giardini, a noted Italian violinist of the time. It was apparently purchased from the artist by John Betts, of London, who was, perhaps the earliest dealer of violins here and whose name will always be associated with the ‘Betts’ Stradivarius.

The violoncello was subsequently sold by Betts to King George IV of England, who, if he was actually the owner of the tithe of the instruments that are reputed to have been in his possession at one time or other, must have been the possessor of quite an extensive collection or else addicted like so many less exalted persons to perpetually changing his instruments.

After the death of the Royal amateur it came into the hands of Si William Curtis, who disposed of it to General Oliver, the important collector of Italian violoncellos. The next owner was an English amateur, Edward Joy. It remained in his possession until his death.

In 1910 it was sold by auction by Messrs. Puttick & Simpson on behalf of Mr Joy’s daughter, who inherited it. Since then it has remained in a private collection in Germany, where it is known as the ‘Oliver’ Amati.

A description of the handsome wood used in this instrument is unnecessary as it can clearly be seen from our illustration. The varnish, with which the instrument is still well covered, is a beautiful yellowish brown. The approximate dimensions of the instrument are: Length, 29 inches; upper bouts, 13 ¾ inches; middle bouts, 9 inches; lower bouts, 17 ¼ inches.