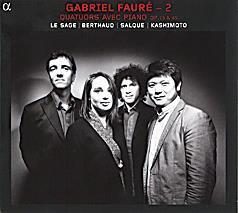 Alpha’s ongoing series of Fauré’s chamber music with piano centres not unnaturally on pianist Eric Le Sage. Thus it’s perhaps fair to say that the string players in this second volume in a sense take their lead from him, resulting in highly elegant playing that is never laden with Germanic baggage (these were after all works promoted within Saint-Saëns’s Société Nationale de Musique, whose remit was to encourage a decisively French music). The performances are convincingly ideal, winning in their nimbleness and panache.

If the scherzo of the C minor Quartet is sprightly and spirited, the players highlight its contrast with the G minor’s more edgy, harder-driven equivalent movement. The C minor’s Adagio brings plenty of drama in its octave doubling, and the movement unfolds as a slow recitative with a directness of communication to match, capped by a deliciously suspended coda.

It’s above all the qualities of transparency, instinctively balanced tone and an ever-circulating background momentum that mark out these performances, and in quantities that should easily convert sceptics of this repertoire. The engineering creates a satisfying balance, with the piano, even at full tilt, never threatening the strings with an overpowering wall of sound.