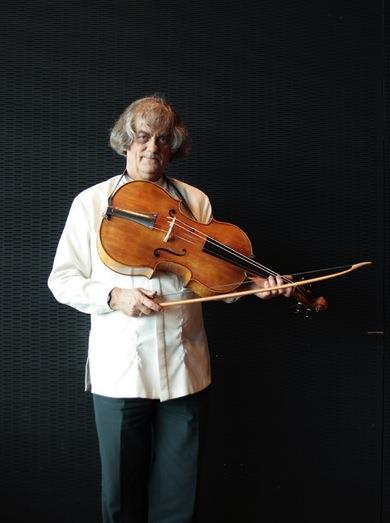 A small-scale cello that sits against the shoulder and is played like a violin will make its London debut as part of a programme from the Orchestra of the Age of Enlightenment (OAE) on 25 March at Queen Elizabeth Hall, Southbank Centre.

The 18th century violoncello da spalla, or ‘cello of the shoulder’, will be heard in a performance of Vivaldi’s Concerto for Violoncello da Spalla in D, a work that according to the OAE lay forgotten until as recently as 2004.

OAE violinist Kati Debretzeni, who curated the orchestra’s current season, said: ‘The violoncello da spalla is essentially a very small cello, played by violinists with a strap around their shoulder. It was a popular and widely used instrument according to those who revived it on the continent a few years ago. It provides a much lighter bass sound to the small Baroque string orchestra than the one we are used to.’

The Belgian violinist, violist and conductor Sigiswald Kuijken (pictured), who rediscovered and revived the instrument a decade ago, will direct and perform the solo part. Kuijken’s instrument was made for him by the luthier Dmitry Badiarov in 2004 and based on historical models and documents:

The concert will form part of the OAE's Gamechangers series, looking at turning points in the history of classical music. There will be a pre-concert event at which Kuijken will introduce the violoncello da spalla.