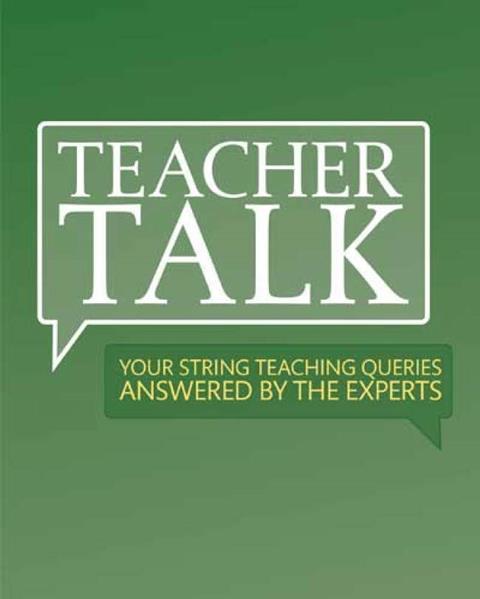 How do you help students who have collapsing top finger joints?

Mimi Zweig: I like students who have double joints because their hands and fingers are very flexible. The right-hand little finger will not collapse if the bow is being held gently. It will not be pressed down and is only needed for support as the bow travels towards the frog. With the left pinkie, I advocate vibrating with flatter fingers which keeps the little finger at a good angle and produces a fatter tone. As students grow older, the fingers become stronger and the ‘caving in’ issue diminishes.

Géza Szilvay: A surprisingly large number of children have extremely weak and collapsing fingers, but with regular exercises the weak little finger will develop strength, flexibility, mobility and elasticity.

Teach one-string, five-note melodies. Take care that the little finger doesn’t collapse, stops only one string and doesn’t touch the neighbouring string. Always have students play their first scales with the fourth finger instead of open strings and play one-octave scales on each string with the little finger used repeatedly.

Do you think it is better to teach a student either the German or French bow hold exclusively, or is it useful to let them make up their own minds?

Jeff Bradetich: There are many factors in deciding which bow hold to use on the bass. It’s a benefit for teachers to teach the hold they know best, although this isn’t always the best decision for the student.

It’s easier for younger students to make a big sound with the German one because of the natural pulling motion of the underhand grip. The French hold is more complex and demands greater dexterity. Later, this flexibility provides greater ease in string-crossings because of the availability of using smaller, faster muscles.

If you are not a bass player, then teaching the French style is probably best as it’s very similar to that of the cello. Don’t model the violin bow hold. This leads to many difficulties in every aspect of playing.

It is important to teach younger students one bow hold, but as they reach college level, especially if they ever want to teach, it’s beneficial to have a working knowledge of both.

If bow development is slow, then I advise allowing the student to try the other hold. Often this solves many of their problems and allows them to progress more quickly.

How do you encourage smooth bow changes at the frog?

Bonnie Hampton: On the cello, one might be told to lead the up bow with the wrist and then pull the down bow with the arm on the bow change. The arm is leading in both directions with the hand and fingers following. But what about that momentary break in the sound, the slight accent one hears because of a quick flick of the hand? In trying to get a smooth, continuous sound, one needs to have the pressure or contact on the string remain constant, with the bow speed the same on the change. This is not so easy to control.

I like to think of the bow simply balancing on the string, with all of the joints of the arm being free and every part of the arm moving during the change, but only as much as is needed. When we have too large a motion from the wrist, we hear it. If some part of the arm is not free, another part will make up for it with too large a motion. Again, everything is moving, but only in proportion and with as little as is needed.

When one watches great players, one sees no excess motions. Every joint is free and every part of the arm is involved. I like to make the bow change with the feeling of a circle or loop, not as if on the same level. One can practise an entire bow stroke with short loops, working all the way down and then back up again. Or one might first work on two strings, D for the down bow, G for the up bow, with the wrist and fingers making the largest motion, but always with the arm leading and taking care to keep the contact with the string constant.

Bonnie Hampton is on the faculty at Juilliard School, teaching cello in both the college and pre-college divisions

Mimi Zweig is professor of violin and viola and Director of Pre-College Strings at Jacobs School of Music, Indiana University at Bloomington

Our Teacher Talk series was first published in The Strad in January 2011. Subscribe to The Strad and get the best in teaching tips every month, from Simon Fischer's long-running Basics column to advice from top string players in Masterclass. Or click here to find out about our digital edition.