Learning the cello as an adult: Mavis Himes

Upon hearing about the retirement projects many of her friends were enjoying, psychoanalyst Mavis Himes decided to jump into the world of learning the cello. Here, she shares her experiences of picking up a new skill later in life 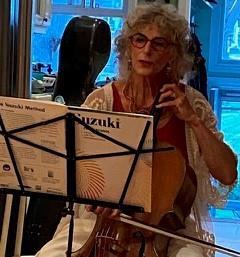 I had finally reached a certain age, the unwelcome period of senior citizenship; a polite euphemistic way of saying I was ’getting old’. Many of my friends and colleagues had already retired and were extolling the virtues of their decision. They sent emails from various ports and cities around the globe, describing their strolls through the cobblestone laneways of Rome, wine tasting on the Danube and hikes along the Camino de Santiago. Some were attending ’lifelong’ university courses and lecture series, while others were volunteering time at a shelter or stuffing envelopes for a local charity.

I too had been thinking about the possibility of retirement. I had spent a lifetime working as a psychoanalyst, dabbling on the side with professional and literary writing. I must admit the prospect of unstructured time sounded both exciting and liberating, yet also left me with a feeling of dread. I did not feel ready to shred my clinical notes, pack up my textbooks on Lacanian and Freudian psychoanalysis, or empty my filing cabinet of the myriad articles I had retained through the years. Recognising my needs for intellectual and social stimulation, I wondered whether I could find enough satisfaction in retirement.

Perhaps it was this subterranean prattle, fermenting like some brew below my conscious awareness that made me announce to my husband one day, ’I have decided to take up the cello.’ I had a similar pronouncement to my mother several months earlier as she lay propped up on her pillows in the final stages of her terminal illness. At the time, I had been too preoccupied with her care to engage in any other pursuits. It was a surprise to hear myself utter the words. ’I am planning to find a teacher and purchase an instrument.’ And that was exactly what I did.

For me, the cello was a noble, elegant instrument. Compared to the violin or viola, it was far more substantial. Acoustically complex and beautifully constructed from maple and spruce, it has an average back length of 75 centimetres and weighs five to seven pounds. Its vibrations are mellow and resonant with a soundscape of rich amber honeyed tones. A musician can enfold its body and fully embrace its breathing reverberations.

We all strive for the possibility and good fortune to maintain our youthfulness, both physically and mentally. We abhor entertaining thoughts of becoming invisible, infirm or (an) invalid. Vitality, dynamism and spiritedness are often eclipsed by prejudicial notions of what can or cannot be acquired in later life.

I knew that my desire to pursue the cello ran counter to the established literature on neurological development that suggested a juvenile brain was more superior for the development of other skills. Learning to play a new instrument would certainly fall into that category. And yet, I was determined to pursue the pleasure and excitement in this challenge. 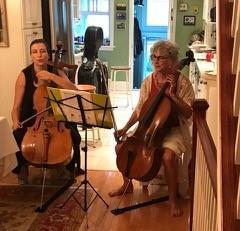 Mavis with her teacher Doborchna Zubek

Within weeks of the pronouncement to my husband, I had contacted a cello player I knew through the Heliconian Women’s Art Association. Days later I was sitting in a Starbucks coffee shop with Dobrochna Zubek, the vibrant and talented young woman who was to become my cello teacher, musical mentor and close friend. Her pedigree was insured through her studies with Cecylia Barczyk, Barbara Marcinkowska and Shauna Rolston.

I was self-conscious about my age. I wondered if an accomplished performer and teacher would want to invest time in someone who would unlikely never reach the potential measures of success awaiting a younger pupil. Perhaps, more significantly, I questioned if she would think me physically and mentally capable of mastering even the rudimentary skills required to play a string instrument. While I had studied piano during childhood and adolescence, it had been years since I had looked at a sheet of music. Additionally, the skill set required by these two were radically different.

From the start, Dobrochna encouraged me to think of my cello study as a journey, an odyssey that would lead me in different directions, introduce me to new people, experiences and expand my listening aptitude. I had no expectations or ambition of attaining any performative excellence but I did aim for incremental proficiency and advancement.

Like any gifted teacher, Dobrochna had a remarkable talent for attending to my unique issues - the physical limitations of my fingers and hands as an adult beginner, the need to develop certain muscle groups in my arms and shoulders, the uneven and sketchy memory and the demanding attention required to learn such a complicated task in later life.

Read: How should string teachers approach an advanced adult pupil?

In stark contrast to my days of piano studies imposed on me by my parents, I now dedicated myself to a daily practice on the cello that exceeded the time limits my teacher had advised.

’Always do a warm-up for your hands, arms and shoulders and no more than 45 minutes of playing without a break,’ Dobrochna had advised. ’You will need to give your body a regular break in order not to harm your muscles.’

Convinced of my invincibility and spurred on by my passion to progress, I eventually paid the price with aches and pains culminating in several visits to my pilates instructor, a hand specialist and a doctor specialising in work with musicians to help temper and mollify the overworked muscles awakened by my new venture.

After two years of struggling with the size of my commercially manufactured cello, I purchased a professional instrument: an 1867 French cello by the luthier Caussin. Persuaded by Dobrochna that I would benefit from a smaller-sized cello more compatible with my hand and body size, I named this petite 7/8 cello Simone, a French name that could be masculine (Simon) or feminine (Simone) and whose derivation from the Hebrew word shema means ’to be heard or listen’. Simone has become, in addition to my husband, an abiding and enduring partner. 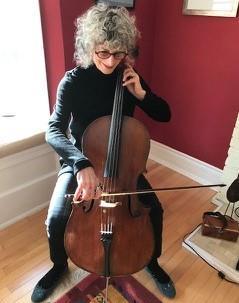 It has now been a few years since I removed the beginner tape from the fingerboard of my instrument and began to feel a certain degree of confidence in my playing. In the meantime, I have experienced a medley of emotions from deep doubt and skepticism through frustration and discouragement to absolute rhapsody and exhilaration. As I progress, I have plateaued and peaked. At times I lamented my ’dumb decision’ and then felt assured enough to perform in front of a few sympathetic listeners. The gratifying pleasure of mastery and the sense of accomplishment have continued to supersede any misgivings I had. More significantly, I am constantly amazed and thrilled to hear the miracle of sound produced by the vibrations of rubbing horsehair against strings perfectly assembled and skillfully attached to many pieces of wood.

Writing these words, I know my musical odyssey continues as I begin playing duets with a pianist and contemplate joining an amateur orchestra. Dobrochna has arranged for me to play with another student and herself in a cello trio. Who knows what other adventures will open up for me as I tread lightly but boldly down this musical path?

Mavis Himes, PhD, is a psychoanalyst, clinical psychologist and author. She maintains a full-time private practice in psychoanalysis and psychoanalytic psychotherapy in Toronto.

Read: Learning a violin as an adult: How do you progress beyond practising for exams?