Fake it ’til you make it: The art of orchestral faking

Cellist and online editor Davina Shum has spent countless hours in orchestra choosing what to play and what to pretend to play. Here she illustrates the necessary skill that can only be described as molto fake-issimo

We all know how important it is to spend time practising the fundamentals. From working on open strings, to developing left-hand dexterity, The Strad website is overflowing with viewpoints from string players from around the world, sharing their expertise and tips on how to perfect your playing.

Sometimes however, there is just not enough time for perfection. I am speaking about those moments in orchestra, where perhaps due to the sheer volume of music to be performed, or eye-bulging difficulty (sometimes both) – the next best thing will have to do. That is of course, faking.

I remember one of my forays into professional orchestral repertoire was when I was 21 and undertaking an internship with the Auckland Philharmonia Orchestra, back in my home country of New Zealand. The first opera of the year (and indeed of my life) was Richard Strauss’ Salome – an actual baptism by fire. The rehearsals for this landed a week after another intense programme of symphonic works (i.e. life in a professional orchestra). My desk partner, who had 20 years over me, could sense me worrying about not being able to nail every single accidental-ridden note in the opera. She glanced over, waved her hand and said, ‘Don’t worry about it. It’s just noise – an effect! The brass will cover us up.’

While this comment may come across as flippant, it holds great practical value in the life of an orchestral string player. There is no point slaving away at every single note if you’re not going to be heard. Save your energy for the exposed soli and passages in rhythmic unison. Indeed, often when faced with something seemingly impossible, it turns out the composer was just after a ‘wash’ of sound and colour. At a composer workshop in 2014, I was in a situation of having to sightread a mass of black notes all in treble clef, solo, in front of the rest of the ensemble and the composer. When I had finished my ‘rendition’, he applauded and said, ‘Yeah! That’s it, that’s exactly what I want.’ I didn’t have the heart to tell him that I had improvised on the spot, but the man was won over by my valiant commitment to recreate the character of his piece.

Read: ’There is little to no room for error’: Sightreading in a recording session orchestra

So much of faking is looking the part. It is an art. While the notes may not be executed with 100% accuracy, other skills must be employed confidently to at least give the image that you know what you’re doing. Crucial skills include a sense of pulse and rhythm (no one likes to let out a stonking wrong note in a rest), bow choreography (if your bow is in the same direction as everyone else’s, who’s to be any the wiser?) and demeanour – no one’s going to suspect anything if you look like you’re replicating the character of the piece. Top tip: raise your eyebrows when playing soft passages, then furrow them when it’s fast and loud. 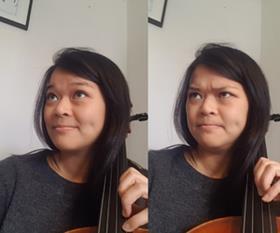 Soft passages, followed by intense, loud passages. Keep your eye on the conductor!

If you ever feel frustrated that you’re not constantly nailing every single note in orchestra: take heart in the fact that pretty much nobody is. Music is written to convey a bigger picture: stories, characters, gestures – which are difficult things to notate, let alone ensure they are legible and idiomatic. It’s important to illustrate the general contour of the music. As any orchestral violinist who’s played Hedwig’s Theme from Harry Potter will attest: knowledge of the overall shape is the greatest tool in your arsenal.

The wonderful violinist Rachel Barton Pine said to me recently, ‘If our violin concertos were only written by violinists, we’d get things that were very idiomatic, but perhaps never transcending that.’ Unfriendly string writing makes us remember that we as instrumentalists are the vessel through which a larger musical idea is expressed, as we extend our overall capabilities on our instruments.

But until my own personal technical capability is extended, I will continue to aim for the downbeat. Anything extra shall just ‘add to the effect’.