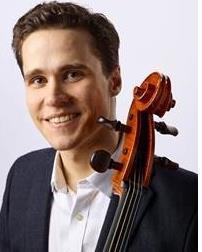 Dane Johansen has been appointed a member of The Cleveland Orchestra cello section from March 2016.

The cellist was a member of the Escher String Quartet for five years, during which time he and his colleagues were BBC Radio 3 New Generation Artists, and recipients of an Avery Fisher Career Grant and the Martin Segal Award from Lincoln Center.

As a soloist Johansen has appeared at the Lincoln Center and Carnegie Hall. he also performed Bach during a 580-mile pilgrimage on the ‘Walk to Fistera’ along the Camino de Santiago in Northern Spain in 2014.

Johansen studied at the Cleveland Institute of Music, Conservatoire National Supérieur de Paris, and at the Juilliard School with teachers including Bernard Greenhouse.