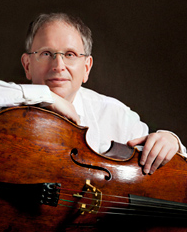 Russian cellist, teacher and writer Alexander Ivashkin died on 31 January at the age of 65. It was at the advice of Mstislav Rostropovich that he pursued an international performing career, becoming not only a sought after interpreter of the standard cello repertoire, but also a prolific advocate of contemporary works.

Throughout his career Ivashkin worked with composers including John Cage, George Crumb, Krzysztof Penderecki, Arvo Pärt, Rodion Shchedrin, Gabriel Prokofiev, Peter Sculthorpe, Brett Dean, Sofia Gubaidulina, Augusta Reid Thomas and James MacMillan. Among his premieres were Penderecki’s revised version of the Largo for Cello and Orchestra in 2008, the world premiere of the orchestral version of Schnittke’s Cantus Perpetuus in November 2011 and, in one of his final major appearances, the world premiere of Gabriel Prokofiev’s Concerto for Cello and Orchestra in May last year.

Born in Blagoveshchensk in 1948, Ivashkin began his musical studies at the Gnessins Special School of Music. As a soloist he performed with such conductors as Mstislav Rostropovich, Valery Gergiev, Vladimir Jurowski and Riccardo Muti, while as a chamber musician he performed with Gidon Kremer, Mikhail Kopelman, Shlomo Mintz, Patricia Kopatchinskaia and Arturo Pizzaro. A recording artist for Chandos, BMG and Naxos, his albums showcase the complete cello music of Rachmaninov, Prokofiev, Shostakovich, Roslavets, Tcherepnine, Schnittke and Kancheli.

Ivashkin taught at schools of music in Russia, the US, Europe, Australia and New Zealand, and at the time of his death was head of performance at Goldsmiths College, University of London. He was a prolific writer, too, with a number of books to his name, and also conducted orchestras and choruses in the UK, Russia, Australia, New Zealand, Canada, Armenia, and Azerbaijan.

He played a Joseph Guarneri cello of 1710, courtesy of The Bridgewater Trust.