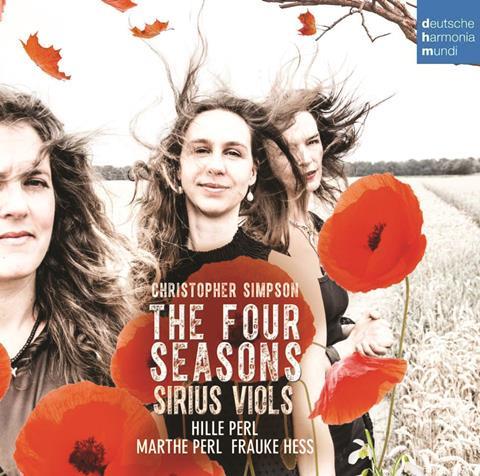 More than 60 years before Vivaldi composed his own Four Seasons, the English Civil War-era composer Christopher Simpson wrote a set of viol fantasies of the same name. German consort Sirius Viols performs them here with poetry and passion, joined by three continuo players on a variety of imaginatively deployed instruments.

Each season is scored for one treble and two bass viols and comprises a Fancy, an Ayre and a Galliard. Simpson’s writing is not specifically programmatic like Vivaldi’s, but occasionally an image is conjured by the music – the bare, sustained solo note that opens ‘Winter’ suggesting a barren, cold landscape and the rapid, separate-bowed trills in the Ayre of ‘Spring’ the twittering of birds.

Sirius Viols – Hille and Marthe Perl and Frauke Hess – plays with flexibility and emotional involvement, and the vibrant, often luminous recorded sound really brings the works off the page. There is no shortage of virtuosity as the divisions become ever more intricate, and there is plenty of light and shade in the sound.

The inspired use of different, mostly plucked, continuo instruments helps to distinguish each season’s character more strongly – the more brittle cittern and bandora for ‘Winter’, the fuller sounds of theorbo and guitar as ‘Spring’ arrives, and the organ adding richness to the warmer months.