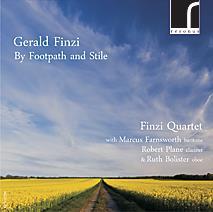 Prizewinner at the 2010 Royal Over-Seas League Competition, the Finzi Quartet has turned to its namesake for this, its first release. It’s a less natural repertoire choice than it seems at first glance, given that the British composer published no string quartets and only two pieces containing this grouping. Both of those pieces are here: the Interlude for oboe and string quartet and the song-cycle By Footpath and Stile, the first of Finzi’s many Hardy settings. The performance of the latter is more engaging, not only because the Interlude itself can seem unfocused as it unfolds, but also because the players reflect the cycle’s preoccupations with loss and separation especially richly.

Also included are the Romance and Prelude, in arrangements by Christian Alexander. Despite its miniature proportions, the Prelude makes an impact in this performance, with sweetly soaring lines and piquant false relations. Such is the expressive intimacy in the larger-scale Romance that we don’t miss the string-orchestra sonority; there’s an ardent quality to the playing and a fitting evocation of that quintessentially English sense of nostalgia laced with regret.

The Elegy, originally for violin and piano, also transfers well to the quartet medium, as do most of the Five Bagatelles (here for clarinet and quartet), though their jaunty outer numbers inevitably lack a little bite by comparison. This is a must for Finzi fans, but also for those whose reservations have previously been provoked by cloying string textures.