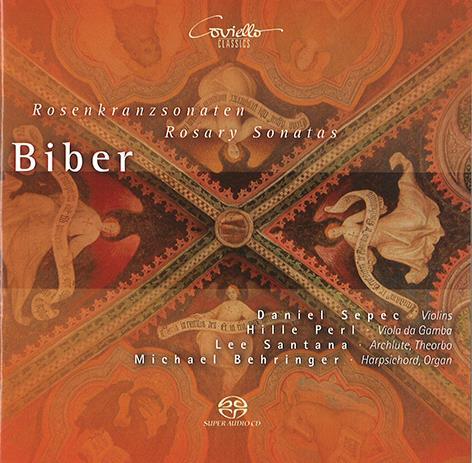 Daniel Sepec uses three matching Stainer violins in original condition (but of contrasting vintage) to overcome the 15 different scordaturas demanded in Biber’s musical representations of the three sets of mysteries from the Bible. He interprets these works with intelligence, style and virtuosity, and he demonstrates much imaginative sensibility to their programmatic elements and dramatic musical language, with almost every phrase conveying musicality and meaning. His continuo group accompanies with unanimity of purpose and ensemble, and its flexible constitution ensures striking variety of texture and colour.

Among highlights to savour are the climactic finale of no.2, the well-shaped Ciacona of no.4, no.6’s grief-stricken utterances, the ‘scourging’ Sarabanda with Variations of no.7 and the melancholic opening Adagio of no.8. Also of note are the sheer brutality depicted in the aria with variations of no.10, the contrasting, joyful aria with variations of no.14 and the fanfares and the triumphant version of the Easter plainsong hymn in no.11. The moving, well-paced account of the final unaccompanied Passacaglia bears ample testimony to this church recording’s warmth, clarity and resonance. Although eyebrows may be raised at the appearance of yet another recording of Biber’s masterpiece, this one will undoubtedly challenge for supremacy in the marketplace.