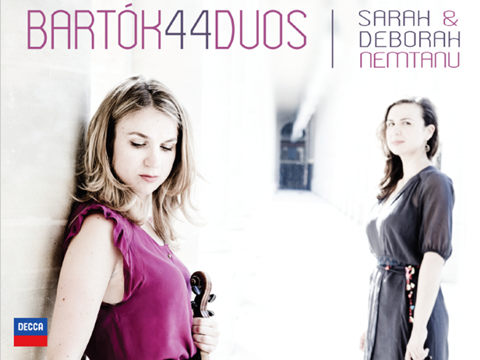 Béla Bartók wrote his 44 violin duos primarily with education in mind, their technical and musical demands growing in complexity from the simple, foursquare openers to the exciting complexities of the final works. In the hands of the French-born Nemtanu sisters, however, all of these duos come over a little like showpieces.

The sisters’ technical prowess and vivid characterisation of the music are never in doubt, but early on among Bartók’s simpler creations you long for a little more… well, simplicity. Even the opening ‘Teasing Song’, superbly phrased and shaped though it is, seems rather overblown. By the end of the set, however, the two sisters seem far more at home among Bartók’s more complex demands: the closing ‘Transylvanian Dance’ is fiery, beautifully detailed and attacked with vigour, and the earlier ‘Arabian Dance’ is astonishingly effective in its rhythmic freedom, the two players rarely even in sync with each other, with a gorgeously expressive – and entirely separate – sense of rubato.

Bartók consciously based every one of the 44 duos around Central European folk tunes, and while there’s a certain appealing rawness to a few of the Nemtanus’ numbers, too often any folksy gutsiness seems submerged in their rather studied characterisation. The disc’s recorded sound, however, is clear, warm and very detailed.