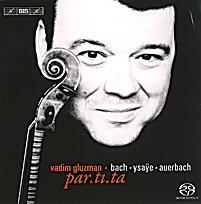 Recorded in a fairly generous, open acoustic, Vadim Gluzman’s deftly articulated, gently cushioned playing comes across as particularly alluring in surround-sound of almost tactile presence. Solo Bach responds particularly well to the ecclesiastical ambience, especially as Gluzman coaxes the natural resonances of his instrument via a range of supple bow strokes that encapsulates cantabile grace and tonal lucidity. His immaculately focused sound is achieved, at least in part, by strong left-hand fingers, which can occasionally be heard (via fingerboard resonance) crisply articulating the nifty Bourrée and Gigue of the E major Partita.

It was an inspired idea to follow with Ysaÿe’s Sonata no.2 (dedicated to Jacques Thibaud), whose opening ‘Obsession’ destabilises tantalising fragments of the Partita’s Preludio with the grim musical spectre of the Dies irae chant. Gluzman strikes a near-ideal balance here between improvisatory fantasy and clear interpretative focus. Lera Auerbach’s 2007 par.ti.ta is a 20-minute work in ten sections, composed especially with Gluzman’s playing in mind (other works she has written for him include the 24 Preludes for violin and piano and Sonata no.2). Although Bach is never directly quoted, he acts as a spiritual exemplar for Auerbach’s coruscatingly inventive writing, brought strikingly to life here by virtuoso playing of gripping intensity.