8 questions for Thomas Riebl: on being a violist, his five-string instrument and more

Following his workshop at the Shanghai Conservatory’s Viva La Viola Festival, the Austrian soloist and chamber musician talks to our correspondent Nancy Pellegrini 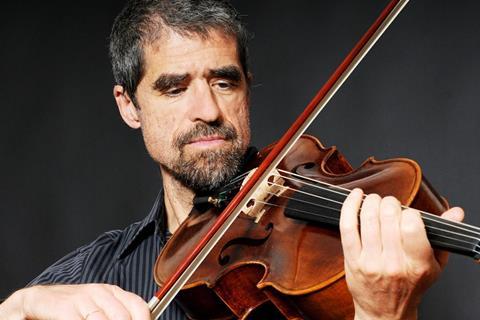 You mentioned you center of gravity and breath support being crucial for violists. What happens if you neglect these elements?

Needless to say, every musician has to find his or her personal way of playing. However, I believe the awareness of one’s body centre or centre of gravity, as well as good breathing technique are very, very helpful for playing at ease, with less effort, and becoming part of the flow of the music. The brain loses the dominant position and becomes just one aspect of the whole thing.

How about dealing with physical pain and tension?

This is a big issue! We tend to try much too hard and with too much effort. Of course, we have to put effort into good practice, but we should come to a point where we can let it play. We need lots of energy, but little effort and no force. This makes a big difference: playing becomes fun for both players and listeners. In addition, the sound changes substantially for the better because the instrument responds to the player’s relaxation.

Not at all! I think it’s a very nice aspect. Violists are normally more relaxed and less ambitious than, let’s say, violinists or pianists; probably because sonority and lyrical qualities are more important than virtuosity, speed, and brilliance.

Violists have to cope with a far smaller repertoire and thus find more time for chamber music, which of course supports social qualities. For sure, violists are one of the nicest, if not the nicest, group at festivals, competitions, and so on. By the way, the best viola jokes you will hear are from violists!

Tell us about your five-string viola. Why did you decide to you needed a lower string?

I asked luthier Bernd Hiller to build a viola with an additional low F string (which was specially designed for me by Thomastik-Infeld) to enable me to perform Schubert’s Arpeggione sonata as originally written. Therefore, I have to tune the low F string down to E, which was the lowest tone of the Arpeggione.

So, you developed this instrument so you could have a wider repertoire?

Yes, in addition to the Arpeggione sonata, I often play my arrangement of Beethoven’s second cello sonata (op.5 no.2) in G minor, and the 6th cello suite by Bach – which was written for the cello piccolo, a small five-stringed cello with an additional high E string, and the viola da spalla, a huge viola played with a strap around the neck to hold the instrument, tuned like the cello piccolo.

I also perform the gamba sonatas by Bach and, most recently, the clarinet concerto by Mozart in the original version for basset clarinet.

But, as I said before, Schubert’s Arpeggione sonata was the initial piece.

What about that piece was so important to you that you developed a separate instrument for it?

It’s a most beloved piece of mine; I had played it many times. And I got more and more frustrated having to escape into higher octaves and not being able to play the full texture.

And do you think if this instrument was more widely developed we would see more solo viola pieces written? Is this a goal of yours?

Yes, certainly. Some pieces already have been written for the instrument, partly as duos with a normal viola. Sergei Tanejev wrote a very beautiful terzetto for violin, viola, and tenor viola in 1910.

When you show up to a concert with a five-string instrument, is there any resistance from violists, maybe saying that it’s not a real viola?

No, no, they’re amazed and impressed. Because it widens the range of the instrument and offers an unusual sound spectrum.