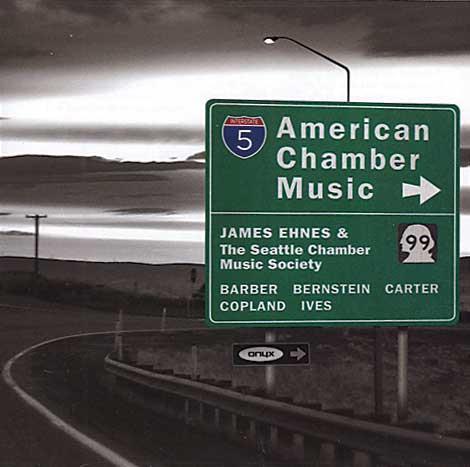 Although in many ways Charles Ives was a one-off as a composer, he also proved to be one of the founding fathers of modern American classical music, and his Largo for violin, clarinet and piano of 1901 already employs the kind of mildly dissonant harmonies that would go on to colour the rest of the music featured in this eminently refreshing programme. It was this same pungency to which the young Leonard Bernstein turned, 36 years later, for his Piano Trio, a work whose spiky outer movements take much of their lineage from Stravinsky as well. Both are played by members of the Seattle Chamber Music Society, with violinist Amy Schwartz Moretti employing an unadorned tone that ideally captures the often naive simplicity of the Ives. This contrasts with the warm and technically adroit account of the Bernstein, where the dexterity of cellist Amit Peled is particularly notable as the work hastens to its cheerful and frenzied conclusion.

Elliott Carter’s Elegy for viola and piano, composed before atonality took over the composer’s life, is a short work of intrinsic beauty, here given a tender and lyrical reading by violist Richard O’Neill. The performance of Copland’s Violin Sonata by James Ehnes is technically immaculate, and though I find his generous vibrato tends to smooth out the score’s moments of acerbity, the calm of the central Lento is mystical. He takes the leader’s chair for Barber’s String Quartet, where a powerful and intense reading of the outer movements surrounds an unhurried and affectionate view of the central Adagio.

This is an excellently recorded anthology that can be strongly recommended.