The evolution of stringed instrument cases has been underpinned by the twin pillars of safety and aesthetics. From the ivory-inlaid cases made for ‘Les 24 violons du Roi’, the set of instruments established by Louis XIII in 1626, to the sturdy yet eye-wateringly lavish ‘Apostle’ cases of W.E. Hill & Sons in the 1880s, the purpose of the case has been both to protect and enhance the majesty of the cargo within. Today it’s never been safer to own a precious instrument. But the demands on cases have never been higher. Safety and style are de rigueur, but what about weight, climate resistance or environmental sustainability? Science, technology and human ingenuity have provided the answers, enabling the 21st-century instrument case to be a model of both beauty and innovation. Here, we look at some of the latest releases and reveal a secret or two behind what makes a great modern case. 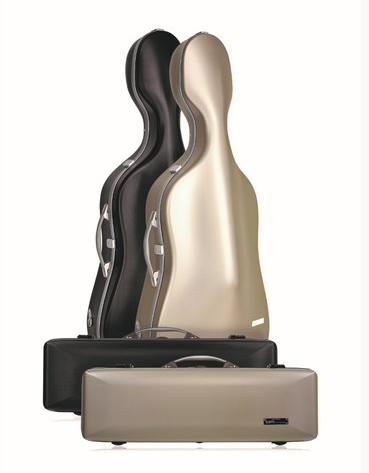 First up are the latest cases in BAM’s Supreme range, namely the Hightech and its Ice and Orchestra variants. Available for cello and violin, all three lines showcase BAM’s signature eye for style. But the real interest comes from the material used, with the Suprême cases representing the evolution of BAM’s L’Opera violin case, the market’s first to be manufactured with a 100 per cent polycarbonate outer shell. Polycarbonate is famously shock resistant, heat resistant and lightweight, making it an ideal source material for instrument cases. But it is expensive and can be difficult to work with. ‘We started research and development on this four years ago,’ says Robert Goetz, BAM’s CEO. ‘Polycarbonate is more difficult to thermoform than ABS or an ABS blend. You need a lot of experience because you’re working with higher temperatures. You need special moulds, for example, that can resist the heat. The whole process requires a lot more time, energy, know-how and technology. If you look at the high-end luggage industry – companies like Rimowa or Samsonite – they are all using polycarbonate. Our self-designed and patented BAM locks are made from polycarbonate as well, and are more or less indestructible.’ BAM put the cases to the test through rigorous trials at its laboratory in Solingen, Germany, including exposure to high-pressure water hosing, repeat-lifting with weights of up to 5kg inside the cases, and a frankly terrifying procedure of placing them in what can only be described as a giant, industrial tumble dryer. The cases passed with flying colours. And for extra security, musicians can track the location of their case using BAM’s tracking device and coordinating Gigs app, purchased separately but suitable for any brand of violin case. 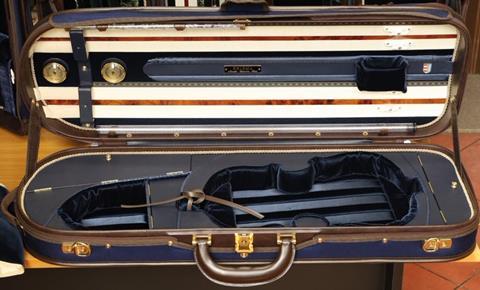 Innovation with materials continues in the Enigma Series 3 violin case from Dimitri Musafia, founder of Musafia Cremona Italy. The first of its kind, the Enigma Series 3 for violin and viola has become the flagship model for Musafia’s revolutionary hybrid Kevlar-laminate cases. Kevlar is a synthetic fibre, used on the Mars Rover and by the military in armoured vehicles and bulletproof vests, but also in more everyday industry, such as suspension bridges, high-performance tyres and yacht sails. Its properties include being lightweight, ten times stronger than steel, and flame resistant at over 400C. Developing a case shell from Kevlar and laminate was an exciting process, says Musafia. ‘The idea was to integrate the qualities of wood laminate – thermal insulation, superior rigidity-to-weight ratio and controlled shock absorption – with the high-tech qualities of Kevlar,’ he says. ‘Case shells have been traditionally made of wood, but in the past couple of decades other materials have been introduced: high-density polyurethane, fibreglass, carbon fibre and thermoplastics. All of these have one thing in common: they are easy to industrialise compared with the laminated wood shell, which is very labour intensive. That makes these materials very popular for mass production. But they have numerous drawbacks, including heat conduction instead of insulation, poor rigidity-to-weight ratio, and a bounce-back effect which means that kinetic energy released during a fall is transferred directly to the instrument instead of being absorbed.’

But why combine Kevlar with laminate? ‘I built experimental cases using high-tech materials back in the mid-1980s and outsourced this research to a well-known builder of competition kayaks,’ explains Musafia. ‘After testing, the advantages for me of wood laminate over the other materials ultimately outweighed its main disadvantage, which was that by surpassing its tensile strength, wood will eventually break. Now, mating wood laminate to Kevlar resolves that issue. Kevlar is so strong that even in its textile form you cannot cut it with a pair of scissors; special tools are required. So resining Kevlar into a wood-laminate structure makes it such that the wood simply cannot split, while maintaining all the positive characteristics of wood laminate.’

The Enigma Series 3 also features pressure-release ports, designed to create more instrument-friendly conditions within the case. ‘If a case is subjected to direct sunlight in summer, the air mass contained within the case will heat up, and along with it the violin, even dramatically,’ says Musafia. ‘Testing showed that the temperature inside a carbon-fibre case, when exposed to direct sunlight at 33–34C ambient temperature, will heat up from 25.5C to 43C in only 20 minutes, whereas a wood-laminate case won’t even reach the ambient temperature in that same duration. To make matters worse, during the same test the relative humidity inside the carbon-fibre case spiked from 50 per cent to almost 80 per cent in just 10 minutes. The main reason for this is that the case is airtight, which many manufacturers use as a selling point!’ So how do pressure ports help solve this? ‘When air is heated it expands, but the airtight seal doesn’t allow that for the air inside the case,’ Musafia explains. ‘So going under pressure, along with other factors, swiftly increases the dew point and thus the relative humidity. The solution therefore is to avoid this pressure build-up, through pressure-release ports. We tested two identical cases, one with pressure ports and one without, exposed to direct sunlight under similar conditions as in previous testing. The presence of the pressure-release ports reduces the initial spike in relative humidity by half.’(See graph, page 28). 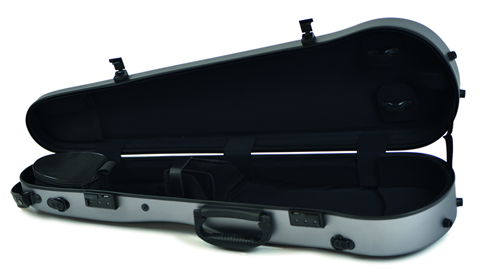 Negri Cases is also boasting an industry first with its forthcoming Sylver File Collection, which launches with a violin case that the manufacturer claims is the lightest on the market. ‘I have always prided myself on using the highest-quality materials in my creations, using exquisite leathers, woods and fabrics to combine luxury with durability,’ says Negri Cases director Luis Negri. ‘While I still love to make and use these designs, this new model recognises a demand in the market for sleeker, lighter-weight options.’ Certainly the Sylver File retains the Negri trademark of chic simplicity, but clearly has also been motivated by more practical considerations. ‘Weighing only 1.48kg, the case is ultra-light but also ultra-strong,’ says Negri. ‘It features an “easy carry” detachable strap system as well as music sheet and accessory pockets, four bow spinners and a chin rest holder.’ The case also includes an internal suspension system that Negri says ‘cradles’ the violin and allows for a small amount of movement inside the case, acting as a shock absorber while still holding the instrument firmly suspended. Negri is keen to stress that losing weight hasn’t meant losing protection. ‘Our carbon-fibre outer shell offers high-tensile strength and low thermal expansion,’ he explains. ‘This gives the ultimate in protection from knocks, bumps, scrapes and humidity, which as we know can be inevitable when travelling with an instrument.’ 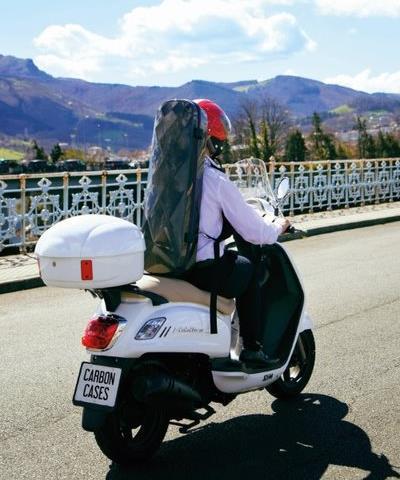 Spanish company LumaSuite, founded by engineer and cellist Maider Camarero Susperregui, has two innovative cases on the market, both of which aim to attract customers to whom bespoke and sustainable products are attractive: the customisable Eco Linen cello case and a violin case which uses recycled carbon fibre. The Eco Linen case is crafted using natural linen, which is hardened using the same process as for carbon fibre. Its customisable feature comes in the form of six soft cushions and pockets, which can be attached anywhere inside, accommodating any type of cello and bow. It was designed following consultation with Maialen Araolaza, a cellist and an ergonomics specialist at the UPV University in Valencia, together with doctors Anna Febrer and Julita Medina of the Sant Joan de Déu hospital for children in Barcelona. Unusually, the closure profile is formed from a blue rubber, rather than the more standard hard plastic. ‘We’ve used rubber because it is very long-lasting and hard-wearing, even in extreme temperature and humidity conditions,’ explains Susperregui. ‘You find rubber seals in food storage containers too, because they take advantage of the hermetic closure.’ But there’s also an aesthetic dimension. ‘The plastics used for cases are normally vulcanised, so they are always black,’ she continues. ‘Rubber can be produced in any colour, so you can easily distinguish your case from others. The navy-blue colour of the closure was selected by our designer because it attracts attention but will never go out of style. In addition, it evokes the maritime tradition of our land.’

At a time when all commercial products face increasing scrutiny over their environmental impact, turning this challenge into a commercial advantage is the name of the game. The recycled carbon fibre used in LumaSuite’s violin case comes from cuttings generated during aircraft manufacturing, and it is used with a flexible resin that resists both impacts and thermal cycles. ‘The scraps of recycled carbon fibre are all mixed together in a kind of blanket,’ says Susperregui. ‘Then this blanket is hardened with resin, forming the shells. In the product testing stage we used recycled carbon fibre that was acquired by the Gaiker research centre in Bizkaia.’ Clearly, environmental consideration runs as a golden thread throughout LumaSuite’s product development. ‘In February 2019 Ihobe, the Basque Government’s Public Environmental Management Society, included us in its official list of eco-innovative companies, for use of secondary materials, remanufacturing and a circular economy,’ says Susperregui. ‘We are concerned about generating minimal waste, and we continue to investigate other materials similar to linen. Ultimately, we would like to develop a new line for instruments such as the viola or the bandoneon, using everything we have learnt in the last five years.’

The LumaSuite violin case also has a neat aesthetic and a design-led touch, with the top lid imbued with rhombus shapes. ‘These rhombuses are not the same, but grow bigger from top to bottom, inspired by nature,’ says Susperregui. ‘The design is distinctive, and the rhombus edges give the structure greater strength, just as rib vaults do in churches and cathedrals.’

Whether the results are impact resistance, climate-conditioning, lightness or being eco-friendly, the drive to find increasingly ingenious methods of working with new materials is uniting manufacturers and propelling instrument cases to new heights. And while the technology may have evolved, the principles of safety and beauty provide a thread of continuity from today’s innovators back to the master makers of yesteryear. Precious instruments have never been in safer or more responsible hands.