Reducing weight with a layer of ‘bullet-proof’ protection 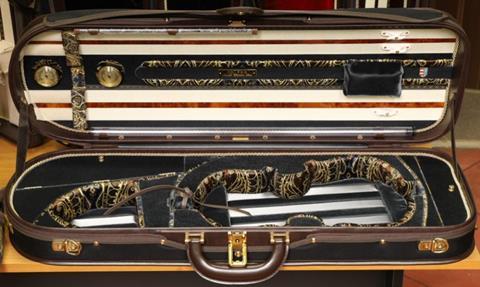 ‘Some people ask me why I’m still making cases out of wood laminate,’ says Dimitri Musafia, founder of Cremona-based Musafia Cases. ‘They think it’s too conservative when newer things are available, like polycarbonate and carbon fibre. It isn’t that I haven’t tried them, just that the data shows that wood laminate continues to offer the best thermal insulation, humidity regulation and tensile strength.’ Sandwiched between the sheets of wood, however, a layer of resin-hardened polyester fibre has traditionally provided an extra layer of protection between the instrument and the outside world. Now, almost 40 years after he developed his first prototypes, Musafia has replaced this with Kevlar.

First used to replace steel in racing tyres, Kevlar is today a favourite component in body armour, on account of a strength-to-weight ratio five times greater than that of steel. ‘Everyone wants their case to be as light as possible without sacrificing its ability to protect their instrument,’ Musafia says. ‘Kevlar is both stronger and lighter than the Dacron fibre we used before. As a rule of thumb, I would say that making the switch to Kevlar has doubled the strength of our cases. There are points on the construction of any instrument case that are going to be more susceptible to breakage – the strength has improved here, too.’

Does working with such tough materials make life more difficult for the manufacturer? ‘The Kevlar layer is less than half a millimetre thick but still we were unable to cut it with ordinary industrial scissors,’ explains Musafia. ‘We had to invest in new electric scissors with a special kind of blade, and we also had to change to a different type of glue. It took us a while to figure it out, but the result is a case that I can almost literally describe as “bullet-proof”.’ Musafia now includes the Kevlar layer as standard in all its cases.