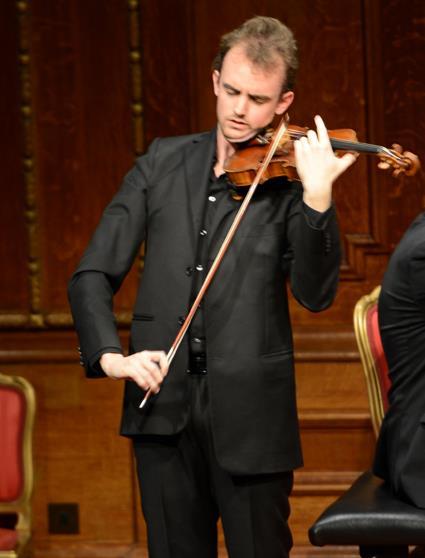 A violinist, cellist and piano trio are among the musicians selected for representation by the London-based Young Classical Artist Trust (YCAT). The young players were chosen at public final auditions, which took place at Wigmore Hall on 17 May.

New Zealand-born violinist Benjamin Baker, 23, won the Windsor Festival International String Competition in March. A former pupil at the Menuhin School, Baker (pictured) is currently in his final year as an undergraduate at the Royal College of Music. He plays a violin made by J.B. Vuillaume.

Cellist Michael Petrov, 22, also studied at the Menuhin School. He went on to study at the Guildhall School of Music & Drama, and performed as soloist with the Guildhall Symphony Orchestra at the Barbican in March. In 2011 he won the International Suggia Competition in Porto, and the following year made his debut at New York’s Weill Recital Hall. He plays a 1790 cello by William Forster.

Petrov is also the cellist in the Isimsiz Piano Trio, together with violinist Pablo Hernan and pianist Erdem M?s?rl?o?lu, both Guildhall students. Formed in 2009, the trio has performed at the Barbican and Royal Festival Hall this season, as well as flying to Canada as resident artists at the Banff Centre in Vancouver. Like Baker, Hernan plays a Vuillaume violin.

Set up in 1984, YCAT provides management, advice, instruction and guidance to young musicians as well as arranging performance opportunities and engagements. The non-profit organisation also advises the finalists of the BBC Young Musician of the Year competition. String players who have received YCAT assistance in the past include violinists Laurent Korcia, Thomas Gould, violist Philip Dukes and cellist Jane Salmon.