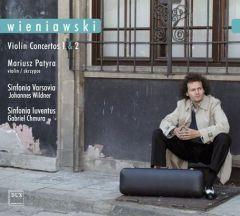 While Wieniawski’s Second Violin Concerto of 1870 is justly known as a masterpiece, the First, composed in a hurry in 1853 when he was only 18, is less frequently heard. Nonetheless, it shows a mature handling of form and orchestral colour, including the dark clarinet tones at the start, here played with appropriate bleakness by players of Sinfonia Varsovia.

Mariusz Patrya, the first Pole to win the Paganini Competition in Geneva in 2001, is master of the superlative difficulties displayed by these works (including the truly fiendish 10ths at the opening of the first concerto). If his tone can fail to bewitch the listener – for example in some rather strained playing in high positions on the middle strings, such as the second subject of the first movement of Concerto no.1 – and there are occasional tiny blemishes in security throughout this disc, his commitment to the sound is admirable, if a little harsh high on the G and E strings at times.

Sinfonia Iuventus makes a distinguished orchestral debut with the second concerto although both works are spoilt by being miked a little too close, picking up too much string surface noise. But overall, this is a compelling disc from youthful orchestras and soloist.