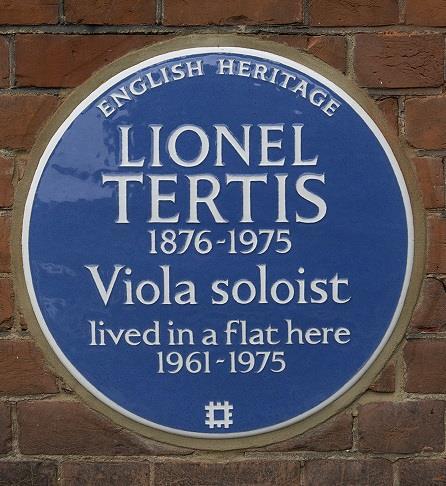 Violist Lionel Tertis (1876-1975) has been honoured with an English Heritage Blue Plaque at his former flat in Wimbledon. Tertis, along with fellow British viola players William Primrose and Frederick Riddle, did much to promote the cause of his instrument and expand its repertoire - during his lifetime works by Ralph Vaughan Williams and Gustav Holst were dedicated to him.

The plaque was unveiled by Wigmore Hall director and Royal Philharmonic Society chairman John Gilhooly, who said: ‘Tertis’s legacy is profound and far outreaches the confines of viola playing, as it set a precedent for many other instruments and solo performers. It is a great honour to unveil this plaque in memory of an extraordinary man who stands in the company of Ysaÿe, Kreisler, Casals, Thibaud and Rubinstein as one of the greatest instrumentalists of his age.’

Established by the Royal Society of Arts in 1886, London’s blue plaque scheme celebrates people of historical significance and the buildings in which they lived and worked.