Two men, both aged 22, have been charged in connection with the 30-year-old's murder, which took place during a home invasion 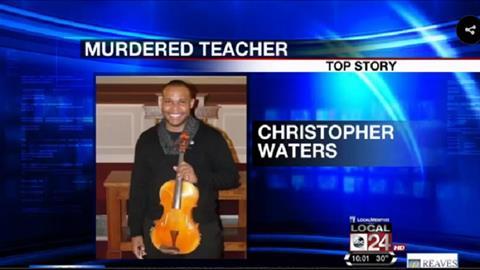 Violist and music teacher Christopher Waters was shot dead in his home in Memphis, Tennessee on Friday last week. Two men, both aged 22, have been charged in connection with the 30-year-old's murder, which took place during a 'home invasion', according to local media.

The violist had bought his Memphis home just a few months ago. It has been reported that the two suspects were apprehended by police while driving the victim's car.

A native of Nashville, Tennessee, Waters was a graduate of the Nashville School of the Arts and the University of Memphis, majoring in music education with an emphasis on instrumental music. He was a string teacher for Memphis City Schools and a gigging violist, in addition to working as a strings specialist for Amro Music since 2010.

A number of friends and colleagues have taken to Facebook to share their memories of the musician:

'This is absolutely heartbreaking! Christopher Waters was a wonderful violist and good teacher. A few years ago, while in New York, he heard I was a contractor, contacted and played for me. He wasn't just a talented violist, he was a very good teacher. We spoke about various techniques to motivate students and what repertoire to teach them,' wrote David Caines Burnett.

'I'm very sad to hear of the death of one of my grad school colleagues and friends, Christopher Waters. He lived every second of every day with passion, energy, humor, and a clear love of teaching and music. The world has lost one of its brightest lights in the worst possible way. RIP, Chris,' wrote Kevin Boehm.